Most of us would just as soon step on a cockroach rather than study it, but that’s just what researchers at UC Berkeley did in the pursuit of building small, nimble robots suitable for disaster-recovery and search-and-rescue missions.

Most of us would just as soon step on a cockroach rather than study it, but that’s just what researchers at the University of California Berkeley (UC Berkeley) did in the pursuit of building small, nimble robots suitable for disaster recovery and search-and-rescue missions.

A team led by Ronald Fearing, a professor in UC Berkeley’s Dept. of Electrical Engineering and Computer Sciences, took inspiration from the agility and locomotion capabilities of cockroaches to develop a new type of robot small enough to fit into your hand that can scurry into places that humans can’t to aid in rescue or recovery, he said. 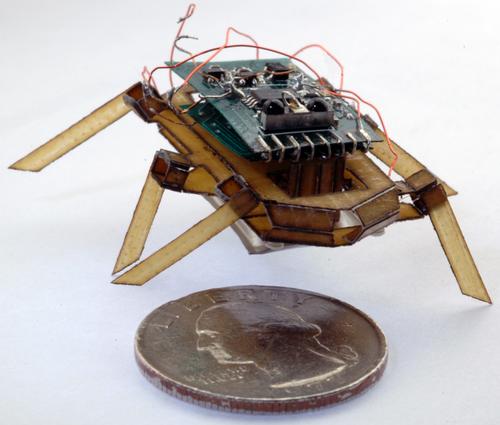 “They are truly an all-terrain animal, and our long term goal is for our robots to also be all-terrain,” Fearing told Design News about why he and his group, in collaboration with Professor Robert Full of UC Berkeley’s Department of Integrative Biology, have been studying the locomotion of insects, lizards, and other legged animals for nearly 20 years.

While larger robots exist that can navigate rubble and go places humans can’t for disaster relief efforts, the key idea behind the cockroach-inspired robots -- aptly called VelociRoACHes -- is that they are small enough to fit into even the tightest of spaces, he said.

“Our concept is that by making robots small, they can go in small places, will be robust to collisions, and can be made very inexpensively,” Fearing explained. “Since the robots are inexpensive, many can work together to jointly explore complicated environments. Rapid exploration with many units over a large site is key to finding possible trapped victims. Larger robot platforms may have difficulty going through small openings.”

Fearing said the design of the palm-sized VelociRoACHes is simple when compared to actual cockroaches, but they have some of the same locomotion capabilities. “Our robots have only two motors, one motor for left and one motor for right side,” he explained. “The robots are made with a laser-cutting, lamination, and folding process we call smart composite microstructures (SCM). We have designed a wide variety of these robots, many customized for particular applications.”

SCM is a rapid-prototyping method in which rigid structure and movable joints are laser cut from a single sheet of material and then folded into position, Fearing said. Using this method, designers can create complicated machines, such as robots, quickly and inexpensively.

An individual VelociRoACH robot can run and steer on flat ground at three meters per second. More recently, Fearing said, researchers added the capability for the robots to surmount large obstacles and, by working in a team, two VelociRoACHes were able to climb a step in lab tests.

That team aspect is key to the future development of the robots, with the intent to “generalize this approach, so two, three, four, or five VelociRoACHes could work together to climb an obstacle, or perhaps in the future span a gap by forming a temporary bridge,” Fearing said. “In this way, the complexity of cooperation is available when needed to overcome an obstacle. However, for rapid exploration, many simpler robots are available.”

The team also will work to make functionality like climbing a broad range of obstacles -- including larger steps, steep up-slopes, gaps or piles, or irregular objects -- standard in the robots. “A particular challenge is creating an automatic system that can negotiate obstacles given a small number of minimally actuated robots,” Fearing said, adding that the team is probably about three to five years away from the design of a set of small robots which can fully penetrate a rubble pile in a disaster recovery scenario.

[image via A. Hoover, UC Berkeley]