HomeAutomationCase Study: Building Your Own 20kW Hydroelectric Power Plant
Recent
Automation
Overcoming the Blind Spots in Hemodynamics Monitoring, Beat by Beat
May 25, 2022
Schwab Commemorates 1979 Tech Upgrade with a Custom Firebird
May 25, 2022
AAA Testing Highlights Automated Driving Failures
May 25, 2022
Top 10 Semiconductor Suppliers of 2021
May 25, 2022
POLL
Strategies to Reduce Noise and Vibrations in Vehicles
May 25, 2022
NI CEO Says Data and Testing Key to Future Technology Success
May 25, 2022
NASA Space Missions: To Infinity and Beyond
May 25, 2022
Rivian Patents Automated EV Charging Connector
May 24, 2022 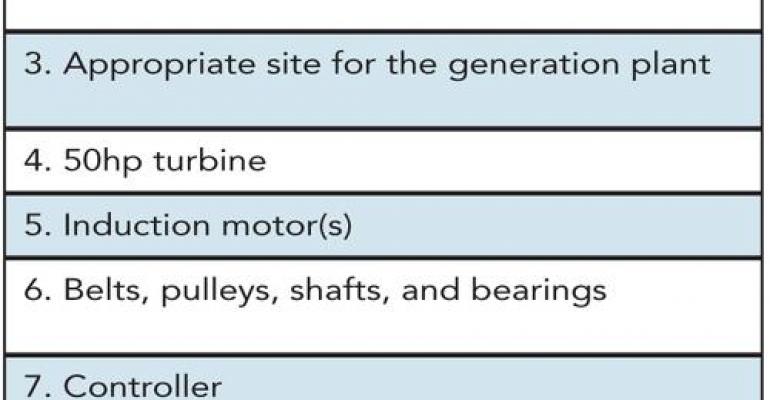 Microhydroelectric power is making a comeback in electricity generation for homes, farms, and small businesses. This trend is fueled by factors including favorable regulation, rising energy prices, and advances in automation. And do-it-yourselfers worldwide are diving in.

The only requirement to generate electricity is access to a stream with a two-foot drop in water level and two gallons of flow per minute. A hydroelectric system isn't overly complicated, isn't difficult to operate and maintain, has longevity, and is often more cost-effective than any other form of renewable power.

Although we'd never built such a system before, we did so by using low-cost components and free technical support, both supplied by AutomationDirect.

In 1980, my father, Arno Froese, began investigating the potential for generating hydroelectricity on his property. The land is situated near the dam of a 64-acre communal lake, allowing access to the 10-foot height differential between the lake and the tailwater on the other side of the dam.

My dad measured the water flowing over the spillway and determined that an average of 40 cubic feet per second flowed through the pond, making it a marginally feasible hydroelectric project. In 2004, my brother Simon discovered our dad's research and decided to move forward. 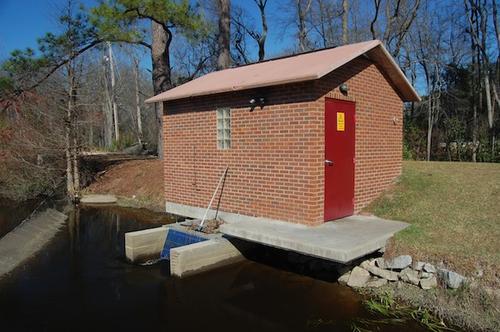 In March 2004, Simon began excavation. For two years, the project was a challenging and sometimes disappointing excavation site, requiring us to dig 17 feet below lake level for the foundation while groundwater and mud continuously seeped into the hole. By the end of 2006, the underwater portions of the plant had been built, a four-foot aluminum pipe through the back of the dam was in place, and a temporary cofferdam was removed. We then installed a refurbished 50hp Francis turbine. Testing determined that the turbine's optimal speed would be 150rpm.

The hydroelectric system is powered by water draining from the lake that flows through a turbine, which drives three generators via a belt and pulley system. The generators are three Baldor Electric model L1177T 15hp single-phase induction motors.

Driving an induction motor at higher than normal speed generates electricity. Output from the three motors was tied into the local electric grid via the same transformer that formerly only provided power to the property. The utility's meter now turns backward when our plant supplies more power than we consume.