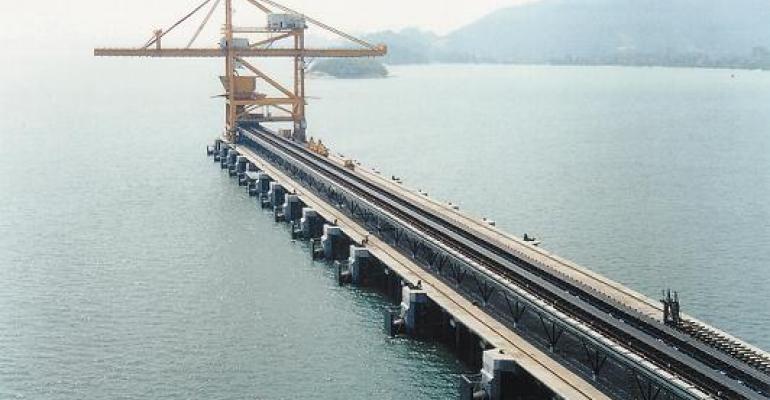 At the Lekir Bulk Terminal in Lumut, Malaysia (known for having the largest capacity for bulk unloading goods in Southeast Asia), coal is unloaded from ships at docking stations on a man-made island by two large cranes built by Germany-based Koch, and then transported the 1.2 miles from the island to the TNB power station by conveyor belt. The cranes can unload up to 1,500 tons of coal per hour.

Koch and Siemens (which was responsible for the crane project's electrical engineering), worked in close cooperation with igus to specify a cable-carrier system for the cranes with 1,448 feet of travel on each crane. According to igus, this application is one of the longest travels for a cable carrier in the world.

An igus ReadyChain, a pre-harnessed cable carrier, supplies energy and data to the trolley and cabin in the cranes. A 732-foot cable carrier is used for the longitudinal travel of each crane. Each cable carrier can accelerate up to 98 feet per minute and is filled with igus Chainflex cables, including CF-Crane, fiber-optic cables, and a water hose used to minimize the generation of dust while unloading. This equals a fill weight of more than 4.7 pounds per foot. With a cross-travel cable carrier weight of more than 2.5 tons, the load is handled using igus' Roll-E-Chain 5050R. This cable carrier's mini-integrated wheels are said to reduce shearing and traction loads by more than 75 percent due to the friction coefficient.

Another igus cable carrier (System E4/4) supplies the drivers' cabins on the cranes with a 240 foot travel distance and 2.8 pounds per foot load. The cable carrier is equipped with specially designed Chainflex continuous-flex cables, which can travel at speeds of 66 feet per minute and accelerate at 1.6 feet per second.

Environmental Factors
An important factor influencing the system design was the tropical climate in which the cranes operate, as temperatures fluctuate between 73 and 93 F with 77 to 85 percent humidity in a sea climate. The intense ultraviolet radiation above the ocean was also an issue. Stainless steel guide troughs protect all the cable-carrier systems from weather and the sun's rays. The cable carriers themselves are also made from a weather-resistant, corrosion-proof polymer material designed to handle such conditions.

The material used in these carriers is an igus proprietary polymer called igumid G, which is injection molded to create the cable carriers. Igus refers to its polymers as triboplastics, because they are tribologically optimized material compounds (Note: Tribology is the branch of engineering that deals with the interaction of surfaces in relative motion, their design and friction, and wear and lubrication). These triboplastic compounds are the basis of all igus products and systems.

In bulk-handling applications, cable drum and slip-ring corrosion is a common problem. Using motorized cable drums for the cross travel would have required supplementary system components. The system would have therefore been more susceptible to malfunction. For example, guiding the water hose would have required a second drum, as well as additional driving gear and controls, which could all potentially malfunction. Similarly, if the trolley travel and cabin supply had used a festoon system, a number of problems could have occurred due to the corrosive climate and the long travel distance impacting the festooning and thereby jeopardizing operational safety.

Reduced Friction, Reduced Power Requirements
The igus solution to supply the trolley is a cable-carrier system that does not require additional driving gears due to the use of igus' Rol-E-Chain, which is a roller chain system instead off a gliding chain typically used in such applications. The Rol-E-Chain's design reportedly decreases friction to a level where travels of more than 2,600 feet are achievable at speeds up to 32.8 feet per second. The reduced friction means that the drive power required to move the cable carrier is reduced by more than 25% compared to gliding chain systems. These cable carrier features, coupled with the fact that igus could provide the complete, fully harnessed system, was a major factor in Koch's and Siemens' decision to work with igus rather than source the different components needed from multiple suppliers.
TAGS: Materials
0 comments
Hide comments
Related
You Might Like