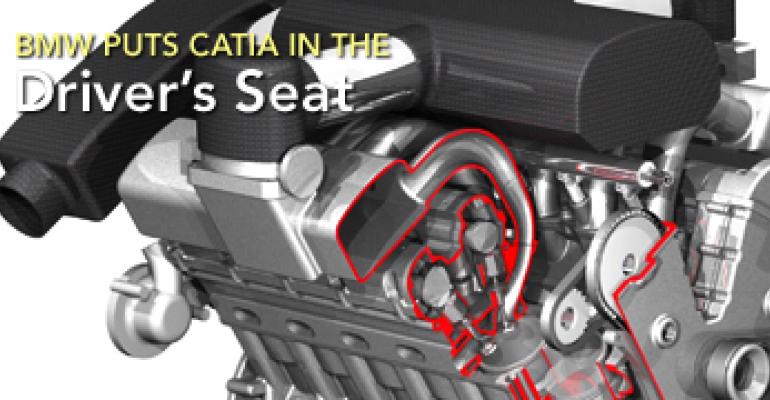 BMW has announced it is standardizing on Dassault's CATIA 3-D CAD tool, a move it says will establish a single digital development system that will reduce the complexity of supporting multiple systems while aiding in skills sharing and design reuse for BMW engines.

By leveraging CATIA across its organization, BMW hopes to create a single reference model for the design of all future BMW engines across its fuel- and diesel-powered cars, motorcycles and new line of eco-friendly hybrid vehicles. By having a single digital reference model that can be updated and shared across the globe, BMW will be able to respond more quickly to consumer changes prior to production as well as garner efficiencies resulting from having common tools, methods and processes across different engine development projects, according to Frank Wienstroth, a spokesperson for BMW Group.

Standardization of data formats (CATIA as the standard CAD format and JT as the standard visualization format) is another benefit of the consolidation, Wienstroth says. One CAD format will allow for more complete and integrative digital mock up for engines and power train development as well as help facilitate skill sharing across the different engine development projects, he says. From an IT perspective, a single CAD system helps reduce costs by reducing the complexities of supporting interfaces to multiple CAD systems and BMW's PLM platform.

In doing the standardization, BMW will be phasing out the use of other CAD tools, including PTC's Pro/ENGINEER, Wienstroth says. The phase-out will take approximately six to eight months for the petrol engine development group and around 12 to 18 months for the motorcycle development organization. BMW will continue to employ other computer-aided tools for its vehicle design process, including simulation tools for vehicle crash testing and temperature and durability studies; computer-aided styling and sketching programs, and computer-aided manufacturing programs to develop and design the molding and stamping as well as production line processes.

Stephan Clambaneva, IBM's global PLM industry leader, hailed BMW's move as a way to achieve operational efficiencies, especially in light of the current harsh economic climate. "Look at this from an operational excellence perspective - by leveraging a single platform, they don't have to reinvent the wheel every time they want to design a new engine," he says. "By focusing on reuse, the design rules, methodologies and knowledge used by one team can be leveraged across others that are working independently. They'll be able to digitally share a master version of an engine or gearbox across different teams, and one single digital reference model can be updated and shared instantly across the globe."

One challenge for BMW may be getting engineers to commit to using a single CAD platform, especially if they've grown accustomed to an alternative. BMW officials don't see it that way, however. "We believe the advantages of a single system will be sufficient motivation for our engineers," Wienstroth says. "Furthermore, we will not provide ProE installations so there is no way to fall back to other systems. By professional training, we will make sure that our engineers will be as familiar with CATIA as they were with Pro/E."

Ed Miller, president of CIMdata Inc., a consultancy specializing in engineering and product development, says the standardization on a single CAD tool is not all that is needed and that consistent processes are key to making this consolidation a success. "To make this work so that all parties are comfortable requires development of processes that are both common and simple enough for all associated individuals across the organization to understand and utilize," he explains. "Once the common processes are developed, consistent and comprehensive education is demanded to ensure that the processes (and the most effective use of the CAD tools to support those processes) are effectively used and that the engineers are able to benefit from their use."