Blue Collar or New Collar? The Fight Over Manufacturing's Future 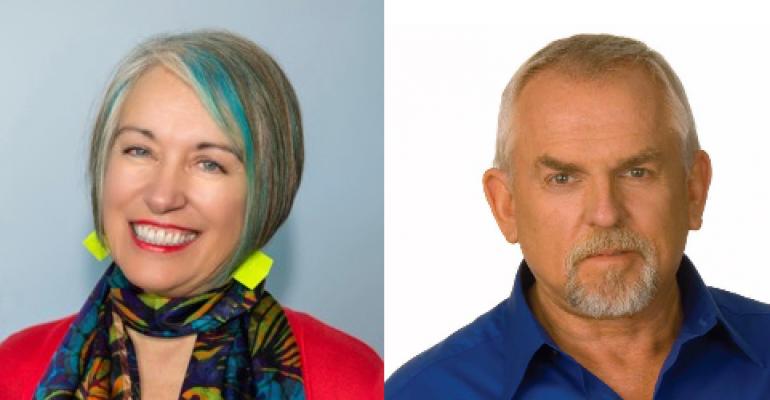 In the face of a growing workforce and skills gap, should factory workers be trading their blue collar for a “new collar?” While some call for a return to the days of old as the way forward for American manufacturing, others are saying it's high time for workers to change and adapt.

“Stop using the term 'blue collar worker' and start using the term 'essential worker,' ”John Ratzenberger told an audience during his keynote at the 2018 Advanced Design & Manufacturing Show in Cleveland (ADM Cleveland). The actor-turned-advocate, best known as the mailman Cliff Clavin from Cheers, believes American manufacturing has entered a crisis brought on by a conflation of new age thinking, the lack of shop classes for kids, music lyrics, and an all-around tenderness and softness that has emerged in American sensibilities. “[Nowadays] you have to worry about the lobster's feelings so you can't boil it,” he scoffed.

That's right, the mailman from Cheers says we've forgotten how to build things and are currently raising “the first generation of useless children.” All of this, according to Ratzenberger, is evidenced by various anecdotes: his college-educated son who abruptly changed careers and became a plumber earning a six-figure salary; the contractor in New York City who travels to Argentina to find qualified welders (and certainly not to avoid hiring workers at a union wage as one might infer); the scholarship student who became a diesel mechanic after noticing a great need for them in her town; and the supervisor at the Grand Coulee Dam who told Ratzenberger there are no qualified engineers coming up the ranks who will be able to maintain the dam in the coming decades.

“We should offer more vocational schools, but we should get kids interested while they're young,” he said. Ratzenberger, who credits his background and skills as a carpenter as what kept him afloat financially while he pursued an acting career, also blamed a lack of parental involvement for younger generations' disinterest in manufacturing. To be fair, he may not be wrong on that front. A 2016 study by the Society of Manufacturing Engineers (SME) found that 20 percent of parents surveyed view manufacturing as outdated and/or dirty work. Half of respondents didn't view it as an exciting, challenging, or engaging profession. And nearly 25 percent of parents surveyed did not feel manufacturing was a well paying profession (according to the SME, the average U.S. manufacturing worker makes $77,506 annually).

“We're running out of people that know how to make and fix things,” Ratzenberger told the audience, bemoaning that because, “we took shop class away from kids” it has created a generation uninterested in manufacturing and created a labor pool in which the average age of a factory worker is 50 to 60 years olds. “You have new recruits coming into your facilities and can't read a ruler, he said. “[They've] never turned a screw or pounded a nail, so how do you expect them to fit into your manufacturing work?”

Much of this he blamed on “the nonsense that came out of the '60s,” which Ratzenberger apologized for, sharing that he was one of the carpenters who built the stage at Woodstock. “If I'd known I would have rigged that Woodstock stage to collapse for sure,” he said, only half-jokingly.The actual numbers aren't as extreme as Ratzenberger claimed. According to the Bureau of Labor Statistics the average age of a worker employed in manufacturing in the U.S. is 44.5. While 45 to 54 year olds make up the largest number of these workers (about 25 percent) they only slightly beat out the 35 to 44 year olds, who make up about 21 percent. The vast majority of workers employed in manufacturing (about 87 percent) fall into the 25 to 64 age range. About 28% of American manufacturing workers fall somewhere in the age range of 20 to 34.

The Gap Is Real

While Ratzenberger's rhetoric traffics in the sort of nostalgia that harkens dangerously close to a longing for a time in America when women couldn't vote and people of color had their own bathrooms, there are kernels of truth buried under all of the hyperbole. Automakers and dealerships have had to take it upon themselves to start actively recruiting candidates to make up for a shortage of auto mechanics, for example. And a 2013 study from Georgetown University predicted that by the year 2020 there will be roughly five million unfilled jobs in the U.S., primarily in healthcare and manufacturing.

There is also the growing skills gap to consider. As increasing numbers of the Baby Boomer generation retire it is creating a workforce skills gap that college grads are either unable, or unwilling to fill. It's this growing gap that led President Donald Trump to establish a Task Force on Apprenticeship Expansion, whose mission is to “...identify strategies and proposals to promote apprenticeships, especially in sectors where apprenticeship programs are insufficient,” according to its website. Ultimately, the apprenticeship task force is setting out to submit a final report to the President detailing strategies and proposals for revitalizing the nation's apprenticeship and vocational training programs. As of writing, no official timeline has been set for reaching this goal.

Ratzenberger is a member of the task force and during his talk praised the Trump administration for being the first that he has spoken with to take tangible action toward resolving America's manufacturing labor woes. For the record, during his administration, President Barack Obama launched an Advanced Manufacturing Partnership initiative to bring together universities, federal government, and industry to invest in emerging technologies such as robotics and 3D printing that will create high-quality manufacturing jobs in the coming years.

While there will always be a need and place, in some capacity, for traditional skilled labor roles, the reality is that the world of manufacturing is also undergoing a seismic change that is going to alter, shift, and even eliminate many of these roles going forward. The rise of collaborative robots and factory automation is already changing the face of the manual labor workforce.

The numbers also demonstrate that manufacturing jobs aren't vanishing into thin air so much as they're changing. The aforementioned Georgetown study mentions “high-tech manufacturing” as a specific area where the need for workers will occur. People like Nader Mowlaee, a career coach focused on engineering, have said that a different type of worker is going to be hired in in the near future, with many of these jobs requiring some level of post-high school education, but not necessarily a full-on four years of college. “Manufacturers need to understand that those they hire to work on the factory floor are going to be very different in the days and years ahead," Mowlaee told Design News. IBM CEO Ginni Rometty has coined a term for this new type of middle-skilled labor, “New Collar Jobs.” In 2016 she wrote an open letter to then-President elect Trump, urging him to invest in training for these new types of jobs in areas such as cybersecurity, data science, artificial intelligence, and cognitive business. “IBM has championed a new educational model for the United States – six-year public high schools that combine traditional education with the best of community colleges, mentoring, and real-world job experience,” Rometty wrote in her letter. Rometty was also a member of President Trump's Manufacturing Jobs Council, which subsequently disbanded after several members, including Rometty, objected to the President's controversial immigration policies and his stance following a series of white supremacist rallies and protests in late 2017.

From Blue Collar to New Collar

Sarah Boisvert is Chief 3D Printing Officer at Potomac Photonics and the founder of Fab Lub Hub, a non-profit dedicated to preparing workers for new collar jobs through efforts such as training workers in digital fabrication manufacturing skills such as 3D printing. She is also the author of the book, The New Collar Workforce. In her own talk at ADM Cleveland, Boisvert discussed more of the sweeping changes affecting manufacturing. “The machines are changing,” she said. “There's so much rapid change in how we are dealing with technology and integrating technology on the factory floor. There are fewer people with skills with the machine.”

Boisvert pointed to an independent study conducted by Fab Lab Hub, and funded by Verizon, that polled manufacturers on the types of skills needed for today's workforce. In a study of 200 manufacturers ranging in size from Fortune 10 companies, to startups, and government labs. “Ninety-five percent of companies said they need problem solving skills,” Boisvert said.

The second-most requested skill was hands-on experience for operators and technicians. While Ratzenberger called for a return to times when people would learn hands-on repair skills by tinkering around with their own cars in their garage, the Fab Lab Hub study points to a more logical reasoning to the shift away from this behavior, beyond hippie ideology. “Cars have become so complex that people aren't going back to those kinds of activities,” Boisvert said. In a separate interview with Design News she reaffirmed this point, adding, “Now that kids don’t buy cars and fix them up, and now that kids don’t learn those skills on farms and ranches, we have to create opportunities.”

The third-most requested skill? Digital and computer skills, the sorts of skills many kids are learning today both at home and in school – arguably in lieu of shop class.

“Robots are taking over, but it's the humans who are going to collect data,” Boisvert said. “CAD is the number one skill anyone should have, being able to do things like translating a CAD file to GCode. In my factory the lasers never failed, it was always the GCode or the design file not being implemented well enough... More and more we're seeing coding and computer science as a skill on the factory floor.”

The reality of the American workforce is changing, perhaps more quickly than some of us would like. And while the solution may not be to completely abandon the skills that brought up previous generations, it is also not to keep things at a standstill, or worse, turn the clock backwards solely for the sake of maintaining an unsustainable status quo. Green technologies, alternative energies, robotics, artificial intelligence, additive manufacturing, the Internet of Things are all here now and today and they're only going to keep growing, not go away. And there's no stage you can collapse to change that.

For now we can be content to call it Smart Manufacturing, Industry 4.0, Advanced Manufacturing, or any other number of buzzwords. These are helpful terms, but also ones that tend to make us think of emerging technologies as something separate from the way things are today. Eventually these things will be normalized and will return to being called what they always have been – manufacturing.

Whether tomorrow's engineers and other workers are ready for this shift is entirely up to us. In the meantime, though we'd all love to keep going back to places where everyone knows our name, we can't forget that once things change, they can never go back to the way they were.