Autodesk Labs Serves up a Taste of Fusion 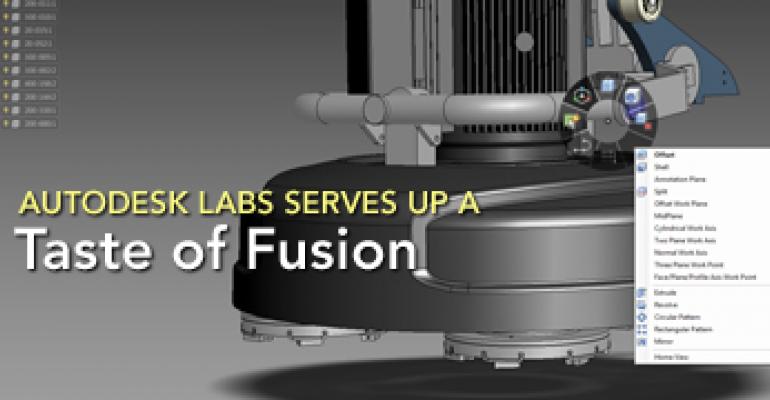 Autodesk took the next step towards making its Inventor Fusion a commercial product by offering up a free download of the direct modeling technology on the Autodesk Labs site and kicking off the process of eliciting feedback from users and CAD experts.

Inventor Fusion is Autodesk's answer to the on-going debate over direct modeling vs. parametric-based or history-based 3-D CAD modeling. Unlike other products in the 3-D MCAD arena, Inventor Fusion will ultimately not require users to choose between the two modeling approaches; rather, as they make design changes, the system will figure out the most efficient way to operate, according to Kevin Schneider, Autodesk's product manager of Emerging Products & Technology for the Autodesk Manufacturing Division. "Currently, customers have to make a choice-there is a single modeling paradigm in the application they choose and they use that to do business," he says. "We think that customers desire to have both modeling paradigms in a single solution ... and we're trying to do that without having to make the user choose one or the other."

The other main area of focus with this initial preview of Fusion is the user interface. Traditionally, direct modelers have been relatively easy to use, but in exchange for that straightforward operation, users have had to sacrifice functionality and intelligence when working with the model, Schneider says. With Fusion, Autodesk is working to retain some of the intelligence associated with parametric or history-based tools. For example, in a history-based CAD program, when making a round or fillet bigger, the modeler makes the changes in order so the fillet knows how to respond when the model size changes. Not so in a traditional direct modeler, where the program doesn't retain the history to know how to direct the corresponding change. "We're doing the work to keep the feature-based behavior, but do it in a history-free way," Schneider says. "That way, when you make a change to a fillet, it stays the same size unless you ask it to change size."

The purpose of offering the Autodesk Inventor Fusion Technology Preview on the Autodesk Labs site is to engage customers in a discussion about what works and what doesn't. Autodesk is encouraging Inventor users and other CAD tool customers to download the technology, work with it and provide feedback. Autodesk is planning a second technology preview of Fusion this fall that will enable users to perform direct modeling for fast changes and see their changes updated in the model's parametric feature history-a key step in its stated goal to offer direct modeling simplicity without losing crucial design intent. This release will also incorporate feedback from customers as a result of this first preview along with additional capabilities Autodesk is refining over the summer, Schneider says.

Deelip Menezes, founder and CEO of SYCODE, a developer of CAD plug-ins, co-founder and CTO of Print3D Corp., which makes a pricing plug-in, cautioned on his CAD industry blog that the Inventor Fusion Technology Preview really only provides a look at really strong direct modeling capabilities-not the holy grail of "fusing" the two modeling approaches. That's where Fusion's real differentiator will come, Menezes says.

In the meantime, any work that Autodesk and other CAD vendors are doing in this area of simplifying modeling will be a boon to users. Says Menezes, "For users, the purpose of CAD software is to design. Modeling is something that must be done along the way to arrive at the design. The easier the modeling gets, the faster the design will be arrived at."