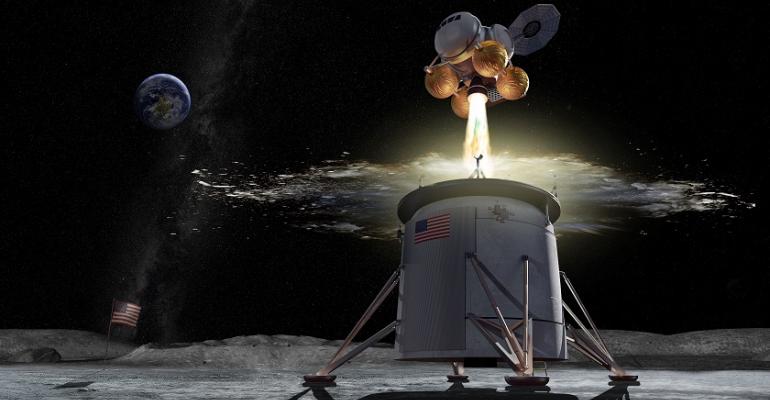 SPACE WEEK: NASA’s Artemis million plans to return men and women to the moon over the next few years, concluding with a continuous human presence in lunar orbit.

The Greek god Apollo had many siblings, but only one twin, his sister Artemis. Quite a fitting, Artemis is the name given to the NASA mission that will take up the work of the 1960’s Apollo program. Even more fitting, in Greek mythology, Artemis rules the Moon.

The Artemis mission is planned in eight stages beginning in 2021. By 2024 the mission will take men and women to the Moon. The later stages will create a place where humans live a lunar life, even if just on the Gateway vehicle that will become a Moon-orbiting studio apartment.

News about the details of the mission are coming out nearly every day. Just this Monday, NASA revealed its conception of the Artemis Moon Lander. In the statement that included an artist rendering of the ascent vehicle, NASA noted it is seeking comments from American companies interested in providing an integrated human landing system to put the first woman and next man on the Moon by 2024.

NASA anticipates a three-stage human landing system. The agency is interested in alternative approaches that can meet the same long-term goals of global lunar access and a reusable landing system. The three-stage concept includes the lunar Gateway to hover in low-lunar orbit to carry the crew to the surface, and an ascent element to return them to the Gateway. From there, they would board Orion for the trip back to Earth.

In a statement NASA Administrator, Jim Bridenstine, noted that “The Gateway will be our home base in lunar orbit – it is our command and service module for missions to the surface of the Moon. Using it as a port for the human landing system, its orbit around the Moon will give us access to the entire lunar surface, and a place to refurbish and refuel the landing system. This is no small feat. Building a 21st century landing system takes the best of our government and private-sector teams.”

The Plans for Returning to the Moon

In May, NASA announced it will return to the Moon by 2024. Here’s the agency’s details about the program to land men and women on the Moon. In this video, NASA also explains the role nine private companies will have in the mission:

The Artemis Mission in Stages

During Artemis 1, Orion will venture thousands of miles beyond the moon during an approximately three-week trip. Artemis 1 is designed to test all the hardware and operations, and then splashdown in the Pacific Ocean off Baja California.

Artemis 2 will be the first mission to the Moon with astronauts on board. Although taking a different trajectory than Artemis 1, this test flight of the Space Launch System (SLS) and Orion will test Orion’s life support systems with four astronauts aboard for a 21-day mission.

This is where men and women actually return to the Moon. It will be the first crewed lunar landing since Apollo 17 in 1972. It will be a mission lasting less than 30 days, and it will involve a short rendezvous of the Orion capsule with Gateway, the space station in lunar orbit that will have been pieced together during five launches by private space companies under contract to NASA.

Astronauts will continue to help build the Gateway's habitation module and descend to the lunar surface.

Astronauts will descend to the lunar surface for various tasks not yet determined.

Astronauts will install a robotic arm on Gateway and descend to the lunar surface.

Astronauts will descend to the lunar surface on one or both of these missions.

The first stop on the lunar surface will be the South Pole region, which is believed to contain water ice. It is also potentially rich in other resources, so the area is a good target for future human landing. NASA has studied this region heavily with robots. While this is far from the Apollo landing sites near the lunar equator, NASA’s Lunar Reconnaissance Orbiter has collected precise information offering details about the South Pole’s topography, temperature and locations of likely frozen water – a necessity for sustainable human exploration.

While water ice is important for sustaining human life, it has other qualities that sustain lunar exploration as well. NASA is considering refueling capabilities to make the landing system reusable, while also working on in-situ resource utilization technologies to make rocket propellants using water ice, and rock and dust from the Moon. Once the ability to harness resources becomes viable, NASA could refuel lunar lander elements with the Moon’s own resources.

Ultimately the Artemis mission may lead to Moon colonization. On a recent press visit to NASA’s Houston facility, agency managers proudly showed off lunar vehicles. They even took a handful of eager journalists on lunar vehicle rides. I felt like a kid at Christmas. When asked if a Moon visit was on the horizon, the NASA host noted, “We’re ready to go as soon as the government pulls the funding trigger.” Well, Houston, that trigger has been pulled.