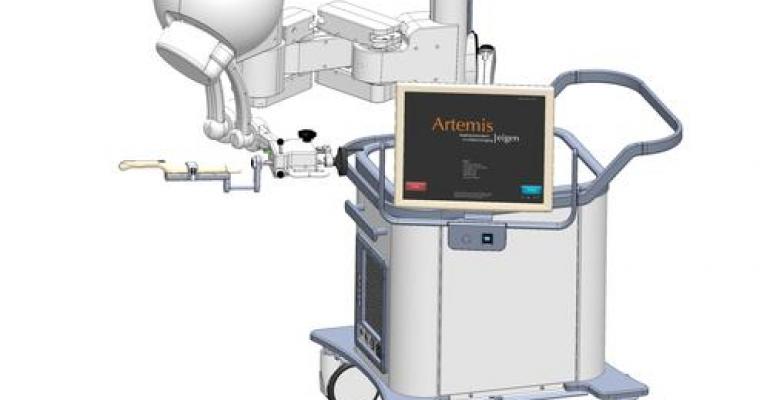 With approximately 242,000 new cases of prostate cancer diagnosed each year, identifying and eliminating it early is the best defense.

When an increase in PSA test levels are detected, a biopsy is needed to determine the extent of the disease. Traditional blind biopsy samples are taken from a dozen or so random locations within the gland in an attempt to locate and map the location of cancerous lesions. Often, several office visits are needed to zero in on these diseased cells. This imperfect but common practice can miss smaller, more aggressive cancerous lesions, potentially letting a cancer occurrence go undetected.

Even if not life threatening, cancer caught too late can result in a radical prostatectomy. This can lead to a decrease in quality of life resulting from complications such as impotence and/or incontinence, so it's easy to see why a far more modern approach is needed.

Enter the Artemis ultrasound-guided, robotic biopsy imaging device. Until its arrival there have been few changes in the last 25 years in the way prostate biopsies are administered. The machine has been tested at UCLA and other US medical research facilities and has been approved by the FDA. It will soon be available globally. 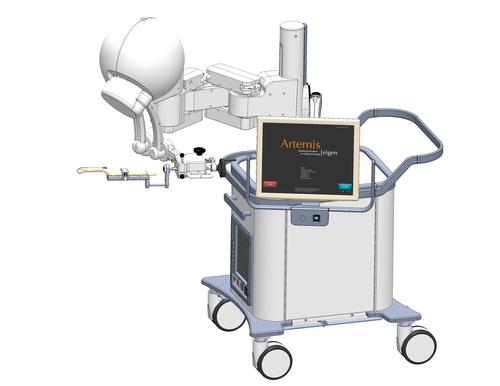 A few features of Artemis include:

First, the standard Artemis software creates a 3D color model of the prostate in real-time from the attached ultrasound unit. This alone helps the urologist better plan and target biopsy locations. The latest addition to the Artemis suite, an external software application, ProFuse, lets radiologists mark up suspected cancerous prostate lesions on MRI scans. Then, on an Artemis equipped with the ancillary ProFuse Bx software, the marked-up MRI images can first be imported, then fused (superimposed) with live ultrasound imaging to accurately target and precisely map out the cancer's exact location(s).

For the Artemis system to function, it's imperative that the exact geometric coordinates of the prostate are registered with its software. The stabilizer/tracking arm sensors equipped with Ogura's PM Brakes provide this capability. The urologist begins the examination with the Artemis arm swung slightly out of the way.

While viewing the live ultrasound image and using the ultrasound probe in a freehand manner, the urologist establishes the center of the gland and then holds the probe in that exact location. An assistant then unlocks the stabilizer arm (the Ogura Brake) and swings it toward the probe. The urologist then secures the probe in its Artemis cradle. Once this is done, the stabilizer arm is once again locked so the geometrical coordinates remain constant.