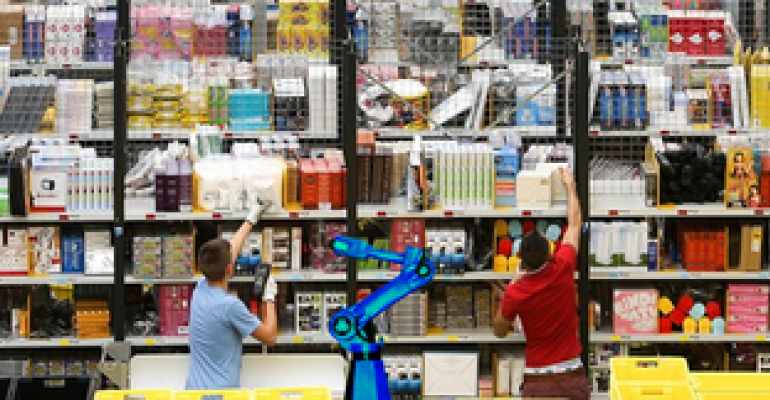 After a successful holiday season using robots to assist in its fulfillment centers Amazon has put out a challenge to the larger community to help push it to the next step of warehouse automation. This May at the IEEE Robotics and Automation Society's ICRA conference, teams will square off in the first-ever Amazon Picking Challenge to take on the task of creating robotic hardware and software to identify, pick, and package items from storage shelves.

The problem is deceptively complex as the robots once you consider the massive variety of products Amazon sells. The robots will have to not only work with standard shapes like books but also with odd shapes like toys and even delicate objects like packaged foods. And they'll have to do it with a level of speed and efficiency that makes it worth the time not to just send in a human for the job. Which, granted, may not be hard since most reports say that being a human worker in an Amazon fulfillment center is hell on Earth.

MORE FROM DESIGN NEWS: The Top 6 Emerging Manufacturing Technologies of 2015

Contestants will be scored based on how many of a specified subset of items their robot can pick within a specified time. Points will be deducted for misidentified items, dropping items, or breaking them. The first place winners will take home $20,000.

Speaking with the MIT Technology Review, Pete Wurman, chief technology officer of Kiva Systems -- the Amazon subsidiary whose robots are currently deployed in Amazon's fulfillment centers -- said about 30 academic teams from around the world will be taking part in the challenge.

While some teams are developing their own robots Amazon has partnered with Rethink Robotics, Clearpath Robotics, Olympus Controls, Yaskawa, and Fanuc, to provide base platform robots for contestants to use. In the video below, one team is adapting Rethink's Baxter robot for the task:

No doubt Amazon will be looking to implement some form of the winning technology into its warehouses, but in a statement the company has said, "...Advances in generalized picking will be directly applicable to other domains, like service robotics, in which robots must deal with a large number of common household items; picking an item in a warehouse is essentially the same as picking a book off a shelf in a home."