HomeAutomationActive Robotic Contact Flange
Recent
Automation
Using Low-Code/No-Code Systems for Manufacturing Quality
May 19, 2022
Los Angeles Fire Department Deploys Nation’s First Electric Fire Truck
May 19, 2022
Supplier News Looks at an Automated Coolant Management System
May 19, 2022
Is Magneto the Hero We Need to Destroy Blood Clots?
May 19, 2022
POLL
Using AI To Help the Deaf Communicate
May 19, 2022
Argo AI Expands Driverless Operation to Austin and Miami in Search of More Challenges
May 18, 2022
12 Ideas that Could Change the World
May 18, 2022
Making the AC Power Main Intelligent
May 18, 2022 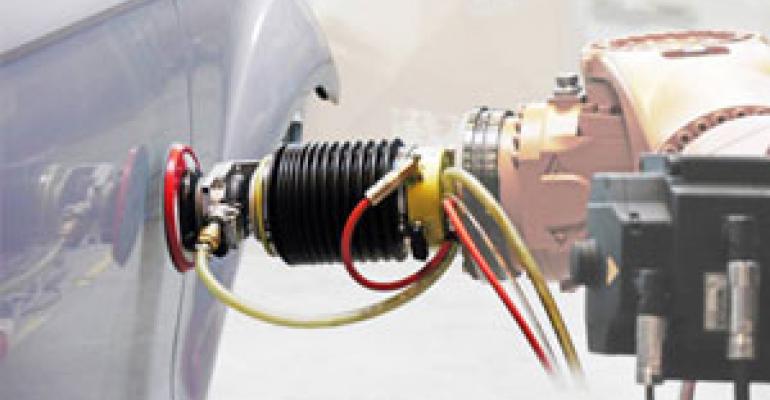 "The combination of active pneumatics and sensing devices along with KEBA's closed loop control platform will streamline implementation processes of robotic positioning based on force, dramatically cutting implementation times, while increasing quality and productivity," says Helmut Schreiberhuber, vice president for KEBA. "The reaction time of this product eliminates typical delayed response times when compared to existing technologies which allows for unparalleled touch sensitive positioning of the tooling."

The Active Contact Flange simplifies robotic path programming because it independently and automatically compensates for positioning to maintain a constant force on the work surface regardless of its contour (within the 100 mm stroke envelope of the flange). This allows a straight line, linear move, for example, to be used in the robot program while buffing a curved object. All that is required is for the user to set the force required and the system takes care of the rest.

The system is designed for touch-sensitive handling of a work piece such as automating sanding, polishing, buffing, stripping, cleaning and deburring applications because the device automatically compensates for position and force control. Other potential applications include gluing, bonding, testing and delicate positioning.

"The core of the innovation is touch-sensitive, surface processing which allows the flange to use integrated pneumatics and sensing devices, in conjunction with a co-processor on the control side, to process the interactions and create motion," says Doug Dalgliesh, president of Flex Market Solutions and a master distributor of KEBA products in the U.S. "The PC-based co-processor is the brains that accepts input from the sensors, and provides the outputs to the internal mechanisms that provide force control positioning."

Dalgliesh says to keep in mind that the controller is not commanding the device to move to a specific position, but actually to apply a specific amount of force. The pneumatic portion of the system is the means to get the force applied, and the flanges have a stroke of up to 4 in. One application example is a robot moving down a convex surface with a buffing pad on the end of the robot arm. Typically, a robot would need to be programmed to specify the points along the curve to keep the end-of-arm tooling at the point of contact.

If the convex curve is four inches high and vertical, the robot would need to be programmed to define all of the points in the curve. It would be further extended at the top, then move back down along the curve and extend again at the bottom. But using the robotic flange and controller, the motion can be programmed using one linear downward motion in the same plane. The flange actually expands or contracts to reach the curvature of the convex piece and maintain the preset commanded force.

"The flange continues to expand until it reaches the pre-specified level of resistance or force that the application requires," says Dalgliesh. "As the flange moves down the part, the force is increasing because its position is deeper into the part and, if it senses an over force, it relieves pressure into the actuator which allows the flange to retract to apply the preset level of force."

The flange is commanded to apply x lbs of force to the surface and hold that force throughout the entire range of travel. From the standpoint of a robotic integrator, the programming is much easier because there is one linear move and the flange is flexibly adapting to the contours in the surface.

The special mechanical design of the flange minimizes the risk of work piece damage due to tool collisions. Even in the case of sudden interference, the system reacts at great speed and gives way using a combination of touch-sensitive and collision protection features.