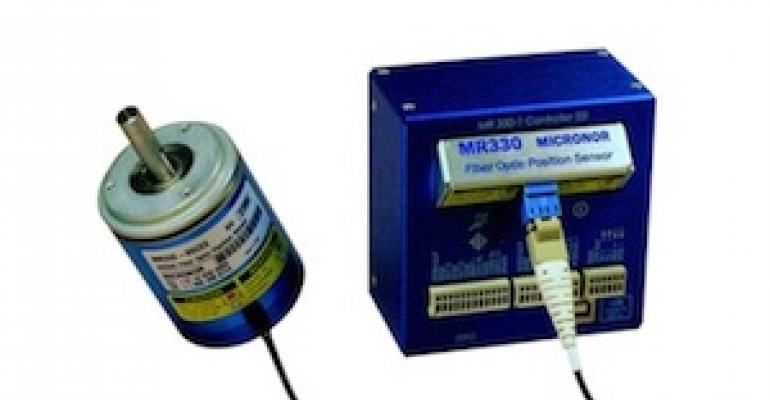 Micronor Inc. has introduced what it claims is the world's first commercially-available absolute Fiber Optic Position Sensor (FOPS). The new Model MR330 series position sensor offers an all-optical design which makes it immune to any electro-magnetic interference such as lightning, radiation, magnetic fields and other harsh environmental conditions. It is also suited for long distance position sensing over hundreds of meters without being affected by ground loop problems.

"The uniqueness of the system is that the sensor is entirely electronically passive because we avoided implementing any electronics in the unit," says Robert Rickenbach, chief engineer for Micronor. "That makes the device fundamentally unique because it can be deployed in areas where lightning might strike, and it will not get destroyed."

"We know this to be true from experience with our previous incremental encoder product which also has zero electronics and uses a fiber optic link to connect to it. The result is that the unit can be deployed in a wide range of applications where there are problems using electronic devices," Rickenbach says.

The new absolute fiber optic sensor uses a novel optical technique embedded in a passive sensor and active controller connected by a duplex fiber optic link. The controller transmits a burst of light to the code disk in the sensor which accurately modulates the spectral components of the light based on angular position. Position information is imprinted in the optical spectrum of the light and guided back to the controller for precise position readout. The sensor requires no electrical power and houses no electronic components whatsoever.

"The heart of this invention is that we used the light spectrum, the color of the light, as the information carrier," says Rickenbach. "We're sending a light out to the sensor that is broadband, on the order of 100 nm wide, in the near infrared range (850 nm)."

The light spectrum is spread over a disk coded almost like a bar code with dashes of mirrored metal stripes. As the disk turns, each code sequence is different so there is a unique code at any position as the disk moves.

On the disk, the bars reflect light only at specific optical wavelengths and only certain colors of light are returned to the controller over a separate fiber optic cable. Inside the controller, the light is dissected and analyzed for its wavelength components and ultimately the result is a position in binary digital form.

The controller keeps the light stable by constantly monitoring the light source and detecting movements. In addition, the user is presented with a PLC-compatible, position signal typically used in automation applications such as Modbus or an analog voltage or current output. The light source used in the sensor pulses for a very short duration (10 musec) because when the disk moves, the system takes a snapshot of actual position and the system pulses the light at 800 musec intervals.

The MR330's accuracy and EMI immunity make it an ideal sensor for applications that require precise motion control and position measurement in challenging environments: oil rigs, satellite antennas, solar panel arrays, actuator systems, transportation systems, steel mills and medical instrumentation. The sensor is also classified as a "simple apparatus" and meets ATEX requirements for use in mines and other hazardous environments. The sensor's immunity to lightning make it especially suited for outdoor applications such as wind turbines and antennas.

The product measures absolute angular position from 0 to 360 degrees with 13-bit (8192 count) resolution at speeds exceeding 2500 rpm. A complete system consists of the MR332 Passive Sensor, and MR330 Controller which interconnect via a duplex fiber optic link. The fiber cable used is readily available industry standard 62.5/125mum multimode fiber with Duplex LC connections. The MR330 controller is powered by 24V dc and features multiple built-in interfaces and protocols for position read-out making it compatible with most any motion systems.