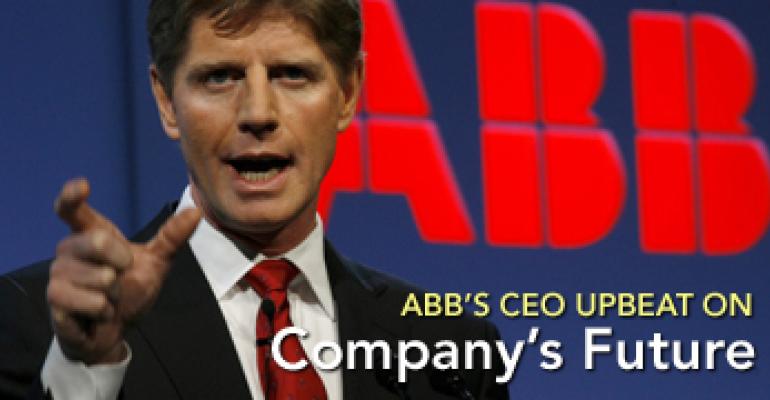 "The economic outlook is very uncertain, but ABB is well positioned to come out ahead," is how Joe Hogan, ABB's CEO concluded his remarks at a press briefing on the first day of ABB Automation and Power World 2009.

Some 3,000 customers are attending the event this week here in Orlando to attend workshops and training sessions, learn about ABB's new product offerings and network with their peers.

Given its diversified portfolio, which ranges from power products and systems to automation and robotics, the $38B ABB is weathering the economic maelstrom better than some.

Hogan told reporters ABB began to see its drives, motors and control products and robotics businesses go down in the second quarter of 2008 and then "get hit pretty hard when the recession hit," due to shorter buying cycles for these products and the downturn in the automotive industry, which is a heavy user of robotics.

Nonetheless, the Swiss-headquartered automation giant recorded its strongest year ever in 2008, with record orders and revenue. And the company has entered 2009 with momentum from a $24B backlog in orders.

Hogan's confidence about the future stems from a strict focus on internal factors that the company can control - from operational excellence to staying alert to growth opportunities. The company also is accelerating several initiatives that it hopes will pay off in the future, including improved engineering and product development efforts to reduce costs.

ABB maintains a steady commitment to R&D, with expenditures in 2009 expected to match 2007 and 2008 levels. The company employs 6,000 out of its 120,000-strong work force in R&D, focusing on technologies as diverse as industrial wireless applications to the energy grid of the future.

Chief Technology Officer Peter Terwiesch described several of the key technology areas where ABB is innovating, such as wind turbine technology. Here, the trend is toward reduced complexity in mechanics and higher sophistication in electronics. "It's the same basic evolution as in automation products," says Terwiesch. That's knowledge ABB can leverage from its $10.3B automation business.

As for this business, ABB is pushing ahead to develop new technologies that will increase productivity without compromising safety, extend the asset life and optimize energy usage. Some of those technologies were on display in the event's Exhibition Hall, including a new ultra low harmonic drive and a small footprint, low-voltage high-performance ac motor.

And while the economic future may be uncertain, CEO Hogan is certain of one thing: That energy efficiency will play a big role in ABB's future. "Some 65 percent of electricity is consumed by industry," he said. "And we certainly can improve upon that."