5 Ways AR Will Change the Reality of Manufacturing 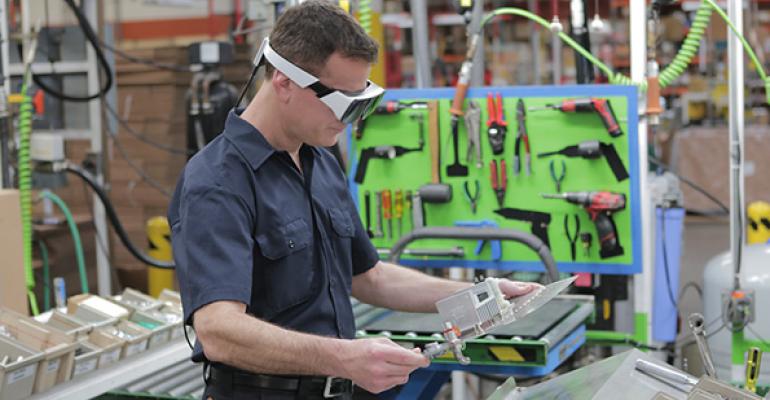 Augmented reality technology will play a significant role in improving productivity, efficiency, and safety in manufacturing. Here's your basic guide to understanding how.

Augmented reality (AR) systems, which overlay digital elements onto a person's real-world view, first appeared in the early 1990s. They have now impacted several markets, such as education, healthcare, entertainment, and gaming. The manufacturing market has recently joined the ranks of these industries by immersing maintenance, production technicians, and training personnel in the world of AR.

Here's a basic rundown of how AR will play a significant role in improving productivity, efficiency, and safety in manufacturing as the technology continues to improve:

1.) AR Hardware on the Factory Floor

RealWear’s HMT-1Z1 headset is a prime example of AR hardware being adapted for the industrial space. RealWear has developed headsets that incorporate all the hardware components to a pair of glasses attached to a helmet. The AR glasses resemble an industrial version of the original Google Glass. The concept behind the industrial AR gear is to immerse the industrial plant personnel with digital data from technical documents and streaming video to aid in monitoring manufacturing processes or help in troubleshooting control systems.

Aside from providing digital documentation for monitoring and repair of industrial maintenance operations, AR is providing upskilling technologies to help production workers. Upskilling is the integration between industrial workers and smart machines. Primarily, AR augments production workers’ abilities to dramatically improve performance, provide industrial safety, and increase worker satisfaction. Examples of deployed upskilling technologies can be seen in the repair of industrial equipment, such as conveyor systems or automation production lines. Computer images, graphics, and text information can be overlayed and displayed using headsets or mobile devices, such as smartphones and tablets.

AR can also be deployed in wearable devices used in industrial and manufacturing facilities to increase worker productivity on a variety of installation, monitoring, and troubleshooting tasks. Delivering accurate data when needed is the real power behind using wearable AR devices within industrial and manufacturing settings. The information is presented in the technician’s line of sight, leaving the production personnel’s hands free so work can continue without interruption. In 2017, GE documented a use case where a technician wiring a wind turbine control panel was recorded using manual work instruction sheets versus an AR headset. The AR headset improves the technician's wiring performance by 34%.

4.) AR for Inspection and Maintenance

Developers are using mixed AR in the production design stage of manufacturing. With AR, developers can rapidly make changes and improvements prior to products going into manufacturing and modeling processes. Product designers at Ford have been using the Microsoft HoloLens to rapidly make changes to automobiles since 2017. Traditionally, clay models were built and used for such vehicle design change activities. The HoloLens allows product designers to overlay digital features onto physical vehicle prototypes. This process reduces the product development cycle time and cost associated with creating automobile clay models.