4 Factors That Determine if a Robot Can Do Your Job 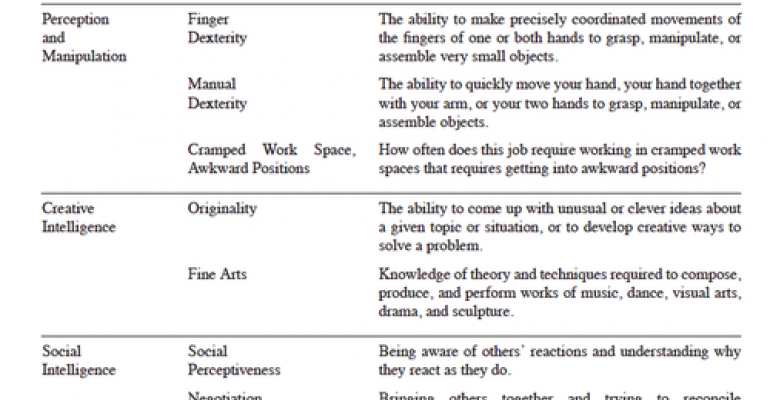 Will a robot be doing your job in the next 20 years? In a 2013 study from Oxford University, "The Future of Employment," researchers identified nine traits which determine a position's susceptibility to automation:

Of the nine the four most important traits were: 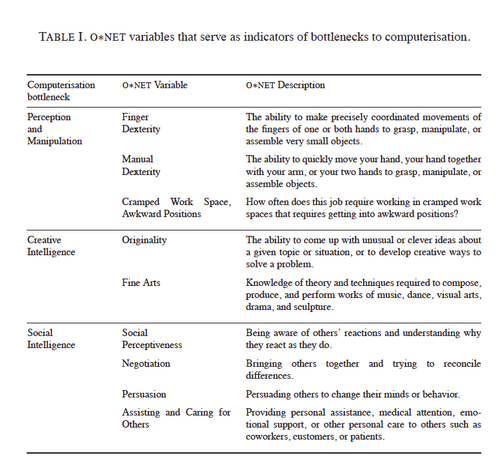 Based on this data, NPR has created an online tool that estimates how likely a given job is to be automated in the next two decades.

Among manufacturing and production jobs, it's no surprise at this point that plant and assembly line work is the most likely to be automated. These positions score low or below average on all four factors -- usually involving a high degree of repetition over clever solutions, little to no assisting or caring for others, and little to no need for negotiation. For example, packaging and filling machine operators and tenders have a 98.0% chance of being automated; electrical and electronic equipment assemblers scored 95.1%; and machinists have a 64.6% chance of being automated.

MORE FROM DESIGN NEWS: The Job Market: Robots vs. Humans

At the other end of the spectrum, positions in management or higher, or those that require more creativity, were found to be relatively safe - scoring average or higher in the four key factors. Construction managers have a 7.1% chance of being automated; computer and information systems managers have a 3.5% chance; and chief executives have only a 1.5% chance of being automated. Computer programmers score a 48.1% chance (high need for originality, but very low in assisting/caring for others), but higher level software application developers have only a 4.2% chance (higher need for negotiation and assisting others than computer programmers).

Using the same data, Salary.com has compiled a list of the nine jobs most likely to be taken over by robots in the next 20 years. The position most in danger? Telemarketers -- with a 99% chance of being automated ... because despite a possibly cramped work space, we all know telemarketers have never been very original or helped anyone.

Check out the tool on NPR for yourself. Where does your job score? Let us know in the comments section below.

Will Your Job Be Done By A Machine? | NPR