3D Printing on the Moon and Mars 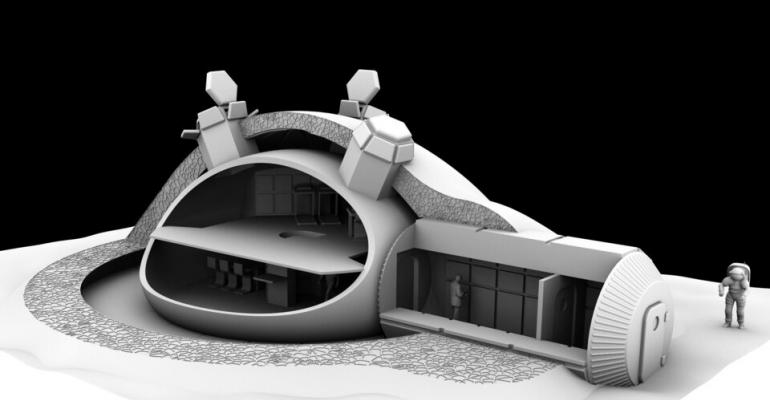 When it comes to exploring – even colonizing – the Moon and Mars, 3D printing can be used to create roads and structures, using Moon and Mars dust.

As we hit the 50th anniversary of the Apollo 13 almost-Moon-mission, it might seem odd we’re just now planning to get back to the Moon. Yet the planning is now developing in earnest. Not only are we expecting to reach the Moon with individual missions, we’re planning to set up shop on the Moon surface. As those plans develop, it looks like 3D printing will be a big part of the build-out.

The 3D printers that are getting developed for the Moon are designed to build the structures and roads from local materials. This would eliminate the costly and time-consuming process of trucking materials to the Moon. Industrial partners including the architects Foster + Partners have joined with European Space Agency (ESA) to test the feasibility of 3D printing using lunar soil.

A number of processes have been developed for Moon- and Mars-based 3D printing. “Processes such as solar sintering would only need power to move the printer head across the printed area, as the energy needed to consolidate the regolith directly comes from the sunlight,” said  Makaya. “Other processes involving lasers or microwaves would need enough power to generate the source of heat in addition to the power required to move the printer head.”

Seeking Materials Already on the Moon and Mars

To make 3D printing on the moon practical, scientists seek materials that are resident on the Moon or Mars, since ferrying materials from Earth to the Moon or Mars would be difficult and expensive. “Engineers and researchers who are active in this field work with what we call regolith simulants. Those simulants are intended to reproduce properties of the actual lunar or Martian regolith which are relevant for the 3D printing process,” said Makaya. “These include particle grain size distribution or mineralogical properties. The development of adequate simulants is an essential important field of investigation that currently involves several actors in and outside Europe.”

While developments are moving forward to prepare for human communities on the Moon and Mars, there is no fixed timeframe. “There is currently no date for activities on the lunar or Martian surface that would require the use of 3D printing,” said Makaya. “Lunar surface exploration missions which are currently planned do not rely on 3D printing. Additive manufacturing using regolith is more seen as a longer-term possibility to ensure sustainable exploration activities.”

Creating a Community for Extraterrestrial Technology

Makaya noted that the  ESA coordinates with NASA on its efforts to develop Moon- and Mars-based technology development. “ESA and NASA are constantly discussing potential partnerships, including in lunar exploration,” said Makaya.

In addition to the space agencies, other organizations are likely to develop extraterrestrial 3D printing. “ESA is relying on mobilizing and fostering the development of the European industrial and academic community across its Member States to support relevant technologies for space activities,” said Makaya. “3D printing for sustainable exploration is included in that.”

Once such commercial partner is Foster + Partners. The company devised a weight-bearing catenary dome design with a cellular structured wall to shield against micrometeoroids and space radiation, incorporating a pressurized inflatable to shelter astronauts. The concept is based on the notion of using 3D printing and materials resident on the Moon surface.

The Italian space research firm Alta SpA has also been involved in developing Moon-based community housing. The company worked with Pisa-based engineering university Scuola Superiore Sant’Anna on adapting 3D printing techniques to a Moon mission and ensuring process quality control. The effect of working in a vacuum was also assessed.

The ESA has launched a formal process to solicit ideas and proposed technology to accomplish 3D printing on the Moon and Mars. “ESA has also recently opened a formal call for ideas on Off-Earth Manufacturing and Construction, where interesting ideas from entities registered in ESA Member States can receive funding to develop concepts and technologies,” said Makaya.