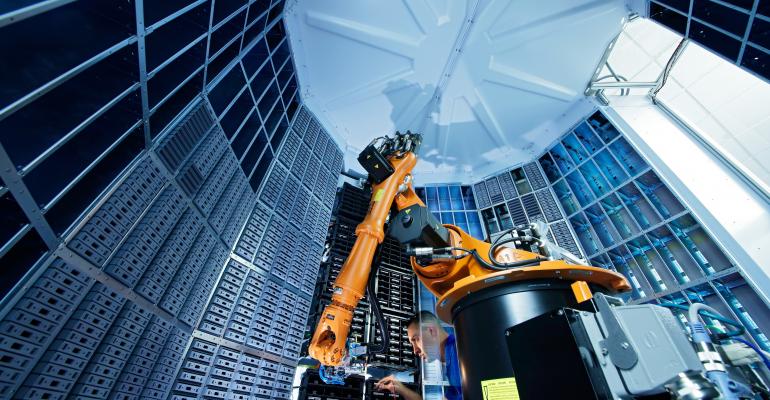 As the market for collaborative robots expands, the industry faces challenges in developing safety regulations as well as some other key areas.

Over the past few years, the world of small robots has expanded considerably. Robots have become affordable for smaller manufacturers. The result is that robots are getting incorporated into the production space with human workers. This is raising safety issues. Standards are getting developed to ensure the safety of workers who interact with robots – or cobots – that are now outside traditional robot cages.

We’re also seeing robots getting connected in industrial IoT. That results in robots interacting with plant machinery and sending data that indicates the operation health of the robot. This connectivity prompts new needs for cybersecurity. Start-ups entering this new world of robotics need to ensure their products are designed with safety and security functionality.

Design News caught up with Ryan Braman, test engineering manager at TUV Rheinland, to find out what he expects to see in the world of robots during 2019.

Braman noted that in order to succeed, robot startups must consider regulations from the start of the design process so that they meet safety regulations. Neglecting this can result in failure when the company goes to market.

Ryan Braman: We see a lot of startups focusing on small problems and trying to create solutions, such as a very specific robot that can mow your lawn, or a robot that has a specific end effector. The larger companies won’t invest a lot of resources and time into these specialized robots. Small startups, however, try to build a company around it. Their focus is often to get a product out the door as soon as possible. That can mean that safety and compliance isn’t considered on the front end. When they try to add it to the backend, it can be a painful process.

2,) Cybersecurity for the Connected Robot

Braman expects to see further adoption of IoT technology in industrial settings. This is driven by the need to integrate existing machines with the robots. This increased interconnectivity will raise concerns about safety and cybersecurity.

Braman: We are seeing more and more IoT in production. We’re seen interconnected machines where one machine says, “Hey I’m done,” and the robot picks up the product or assembly and takes it to the next station. That offers improved efficiency. We’re also seeing robots connecting to a central database with maintenance data in order to minimize downtime. Companies are exploring this IoT, dipping their toe in the water. That connectivity is going to become more common over the next few years, and an understanding of cybersecurity will need to be part of that growth.

3.) Staffing to Run the Robots

According to Braman, collaborative robot companies will grow, and companies deploying robots will need people to build, train, and maintain these machines.

Braman: There is a labor shift going on. We’ve seen it before over the course of history. A huge shift in the industrial revolution moved workers from stitching shirts to running the machines that stich the shirts. It changes the type of work people do. It shifts from workers doing a dangerous job to workers doing a more technical job. We’ll need more programmers and workers who can figure out how to integrate robots into the workspace.

A New Standard for Mobile Robots

The Robot Industries Association (RIA) is in the process of developing the new standard, ANSI/RIA R15.08, which is designed to address industrial mobile robot safety. Braman expects to see additional progress in creating robot safety standards for industrial IoT and cybersecurity as well this year.

Braman: ANSI/RIA R15.08 is on the way and should be released mid-2019. We’ve been working with the RIA on this for some years. The industry decided to merge mobile standards and robot standards. The robot can move to different tasks, driving around a facility without being guided on a path. The robots are now designed to move in the most efficient way without running into anybody or anything. The original standards for mobile robots didn’t take this type of movement into account. So, the new standard addresses robot navigation to make sure the machine doesn’t hit people or objects. It addresses issues such as making sure the base knows where the robot arm is at all times.