10 Collaborative Robot Companies You Should Know 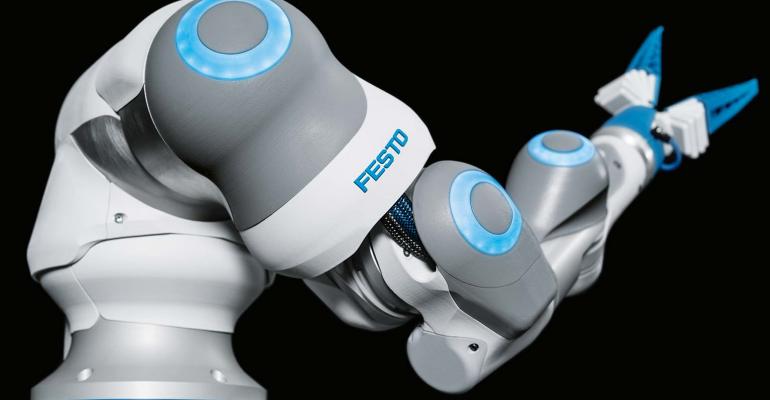 Start Slideshow ›
<p>Collaborative robots -- aka cobots -- have been around since the 1990s, but in recent years advancements in sensors and automation technology, not to mention artificial intelligence, have raised their profile quite substantially.</p><p>The debate around cobots is not likely to die down any time soon. Depending on who you ask cobots are either the next natural evolution of the workforce and will usher in unprecedented levels of productivity or it will devastate the global workforce by eliminating many skilled labor jobs. European Union legislators and Microsoft founder Bill Gates have separately suggested the idea of <a href="https://www.designnews.com/automation-motion-control/if-robots-replace-humans-maybe-they-should-be-taxed/124544353152524" target="_blank">taxing robots</a> in order to make up the tax revenue lost by replacing human workers. And in a recent talk at the World Government Summit in Dubai, Tesla CEO Elon Musk said that robotic automation will reach a point at which one of the only ways to sustain a standard of living for humans will be through <a href="https://www.geek.com/tech-science-3/elon-musk-automation-will-force-universal-basic-income-1701217/" target="_blank">universal basic income</a> – essentially giving every citizen a base-level income from the government.</p><p>However you fall on the debate, it can't be denied that the cobot space is growing. A 2016 report by <a href="http://www.marketsandmarkets.com/PressReleases/collaborative-robot.asp" target="_blank">MarketsandMarkets</a> predicts that the collaborative robot market will be work $3.3 billion by 2020, driven primarily by adoption in the automotive, metal and machining, furniture and equipment, food and beverage, and plastic and polymers industries. The research cited the increasing safety of cobots as a main driver to their adoption.</p><p>So who are the big names in the collaborative robots space? We've rounded up 10 companies that everyone should keep an eye on in the coming years as cobots become increasingly mainstream.  </p>
Collaborative robots -- aka cobots -- are becoming increasingly mainstream. Here are the 10 companies that should be on everyone's mind.

Seeking a Solution to Supply Chain Issues? Reshoring may be the Answer
Oct 14, 2021

Supplier News Has the Scoop: Simulate a New World of Technology
Oct 08, 2021