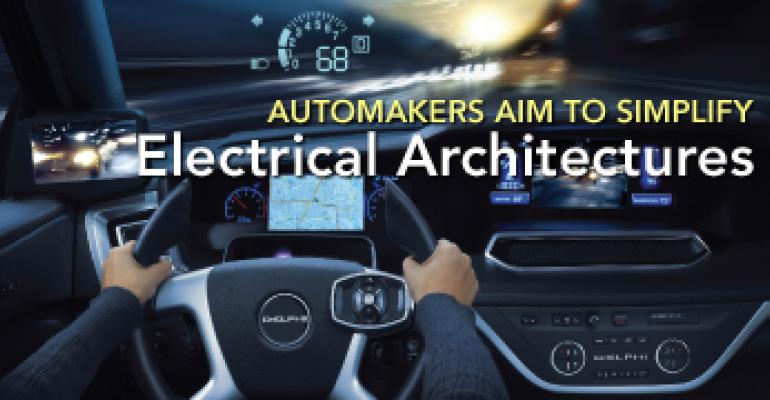 Slash five pounds of mass from the electrical architecture of a vehicle in today's fuel-conscious auto industry, and you're a hero. Cut 10 pounds, and you're an engineering god.

These days - amidst pressures to eliminate weight, cost and complexity - a lot of engineers are trying to be gods. In the labs of some of the biggest auto companies in the world, engineers are talking to tier-one suppliers and semiconductor makers. They're absorbing theories about up-integration, domain control and zone control. They're learning how to consolidate their electrical architectures, packing the functionality of 40 microcontrollers into 20. They're finding out how to slim down their thick wiring bundles. These days, they're listening.

"We're all talking to suppliers," says Chris Thibodeau, director of global technology for electrical/electronic products at General Motors Corp. "They're bringing in new concepts and we're figuring out which ones will be right for us. We don't have a number in mind, but when it comes to weight reduction, we'll take all we can get."

Indeed, today's automakers are nearly obsessed with the idea of electrical weight reduction. But their dilemma is like that of a very fat man who tries to lose weight by eating more. The diet on the horizon calls for more microcontrollers, not less. First, there's safety technology - cameras, vision sensors, radar systems, lane keeping, collision avoidance and new dashboard displays. Then there's the hybrid technology - motor controllers, battery controllers and energy management. All those features need dedicated processors.

Electrical engineers might embrace those technologies were it not for the fact that their vehicles are already packed with too many microcontrollers and too much wiring. Most automakers say that today's average car uses between 35 and 45 microcontrollers. Luxury automakers employ 40 to 50. BMW's 7 Series is said to have topped out at 70.

Wiring is even worse. Today's mid-level vehicles typically carry between 45 and 65 lb of wiring. Luxury automakers use more - perhaps much more - but the numbers are a secret. They don't want to talk about weight; they will only say they want to lose it.

For many automakers, the end result is cost. Electronic modules and wiring are adding big dollars to the bottom line. The percentage of cost attributed to electronics is now estimated to be as high as 40-50 percent per vehicle, up from 20 percent a decade ago. That's one more reason why automakers are searching for solutions.

"The best wire in a car is no wire," Thibodeau says. "From a complexity standpoint, we're wrestling with wiring harnesses and serial data communications. We all want to reduce as much mass from the electrical system as possible."

From an engineering perspective; however, the "electrical fat challenge" is unlike any other in the history of the auto industry. Electronics technology has grown so fast over the past two decades that even the brightest engineers in Detroit have been hard-pressed to keep up with it. Too much of the expertise now lies outside the auto industry.

Delphi Corp., which specializes in automotive electronics, has routinely visited automaker facilities in hopes of driving home the message that vehicles are headed for even greater complexity in the next decade. Some say if the industry doesn't do something, the number of microcontrollers will exceed 70 per car by 2020.

"Over the past six months, we've started to see the OEMs coming to suppliers, asking for input," says Chris Burns, director of global innovation and electrical engineering architecture for Delphi. "In the past, they would say, 'We like your input but we make the calls.' Now they're saying, 'We need your input because we're starting to run out of ideas on how to package all this.'"

Indeed, packaging is the essence of the issue. These days, there's a microcontroller serving as the brain for virtually every function in the car. Engines, transmissions and brakes all have their own dedicated controllers. And that's just the beginning. Air bags, navigation and stability control systems use them, too. So do peripherals, such as window lift motors, seat motors, anti-theft alarms, door locks, power mirrors, lights, remote keyless entry, HVAC systems, radios, CD players and back-seat videos, along with multiple displays. Each of the electronic modules for those features need power and ground wires, along with a connection to the serial data cable. Put it all together, and you have the makings of an electrical nightmare.

Tier-one automotive suppliers say the only way to reduce that complexity is to "up-integrate," that is, combine multiple modules into "domains" that are run by powerful processors. In many cases, they say, automakers could eliminate complexity and weight by replacing three or four processors with one high-end microcontroller that has more memory and greater bandwidth.

"If you had one centralized computing platform, it could gather all the inputs, process them accordingly, and then control things accordingly," says Rich Ravas, engineering director for semiconductors and electronic architecture at Delphi Corp. "You could gather all the lighting, body functions, entertainment and HVAC controls, and all those could be intertwined into one or two centralized computing platforms."

One way to enable such scenarios is to employ a reconfigurable display in the instrument cluster, Ravas says. Instead of having specialized displays for the radio and HVAC system, for example, the re-configurable display could handle the heating, air conditioning, radio, CD player and even a back-up camera.

"It's a matter of being able to switch back and forth between different types of information, processing it, and presenting it to the driver," Ravas says.

Such scenarios grow trickier when trying to determine which features should be up-integrated. After all, not all modules are located near one another. Engine controls, for example, are tucked under the hood; transmission controls are on the transmission; cockpit controls are mounted on the firewall; and safety modules tend to be located near accelerometers. Integration wouldn't make sense for geographically distant features because that would only foster more wiring dilemmas.

That's why many engineers favor so-called "zone control" solutions. In zone control, engineers integrate features that are physically close to one another.

"You could start by asking, 'What are all the parts in a door?'" Ravas says. "Maybe you could have a zone there that handles mirror controls, door locks and window lifts. And that controller presents the information to a serial data bus, which sends it up to the main cockpit computing platform."

Depending on who you believe, such scenarios could yield a microcontroller reduction of 40 to 60 percent. "Middle- to high-end vehicles today might have 35-40 ECUs scattered around them," Ravas says. "If you can up-integrate those functions into 15 ECUs, with the cockpit taking quite a bit of the load, then you'll start to see some savings."

Switching to a domain-based computing platform; however, is a classic good news/bad news scenario. The good news is it simplifies design for automakers; the bad news is it moves the complexity downstream to the semiconductor manufacturers. With the emphasis on more powerful computing capabilities, chip makers will be called on to provide faster processors and more memory for applications ranging from low-end door hardware to high-end safety systems.

High-end applications - such as powertrain, antilock braking, navigation and stability systems - will continue to use 32-bit microcontrollers. The real change will emerge in applications that currently use 16-bit devices. Body control systems and air bags are likely to move to 32-bit architectures. The trend toward higher-level computing will be especially important in safety applications, where new technologies are springing up and sharing data with existing systems, such as airbags. Radar, lasers and ultrasonic sensors, along with back-up cameras, will produce mountains of data that will need to be processed by better, faster processors. Instead of 16-bit, 20-MHz controllers, which are the norm today, safety systems are likely to be managed by 32-bit systems with far more processing power - maybe as much as 1,000 MIPs (millions of instructions per second). Low-end peripherals, such as window lifts, mirrors and seat motors, are likely to graduate from dedicated 8-bit devices to 16-bit controllers that handle an entire zone-full of features.

For the highest-end computing chores, experts say future microcontrollers will look nothing like those that are used by today's auto industry. The biggest difference, they say, will be the emergence of multi-core architectures, which incorporate two or more computing cores per chip.

"Our solution is to move to multi-core rather than to increase the frequency," says Peter Schulmeyer, director of strategy for automotive microcontrollers at Freescale Semiconductor Inc., a major automotive chip supplier "You're going to need 1 MIPS per megahertz for those applications, and that's a question of core architecture."

"Safety is the domain getting the most attention right now," says Karl Greb, a senior systems architecture engineer at TI. "They're going to need MIPS to run those algorithms."

Still, chip makers know they're now just scratching the surface of what will be needed in the next decade. "A lot of the domain control and high-integration applications are not yet fully on the market yet," Greb says. "Most of them are still in development for model years 2012 through 2015."

Automakers say the best bet for the future is a combination of domain controllers and zone controllers.
"A zone gathers all the features into one part of a vehicle," says Thibodeau of GM. "That's helpful. But if you can align the zone with a domain, that's where you really start to see some reductions."

Clearly, engineers are excited about such concepts. In December, when Automotive News ran a story that mentioned, in passing, that the new Toyota Crown had cut its ECUs from 60 to four, the news traveled to every corner of the industry in a matter of hours.

Even the most optimistic automotive engineers acknowledge; however, that the reduction plans may get bogged down in the next few years by the emergence of new hybrid vehicles and safety technology. Hybrids will have a multitude of new electronic modules that don't exist in gasoline-only cars. Moreover, new safety systems - from adaptive cruise control to lanekeeping to collision avoidance - are about to add another electronic dimension to the vehicle.

"The question is whether the integration of existing functions is happening fast enough to compensate for the addition of new functions," says Schulmeyer of Freescale. "As soon as electric propulsion is added to an internal combustion, it increases the number of controllers in the vehicle."

Many engineers believe the auto industry will do well to hold the line - that is, keep the microcontroller count at its current levels. Still, they know they must integrate, lest the architectures of the coming decade grow overwhelming.
"You can't just continue to string more and more modules into the vehicle," says Ravas of Delphi. "In today's auto industry, it's important to take a holistic approach. You need to look at the controllers, the wiring and the connectors, and partition them in a way that reduces cost, mass and complexity in the vehicle."