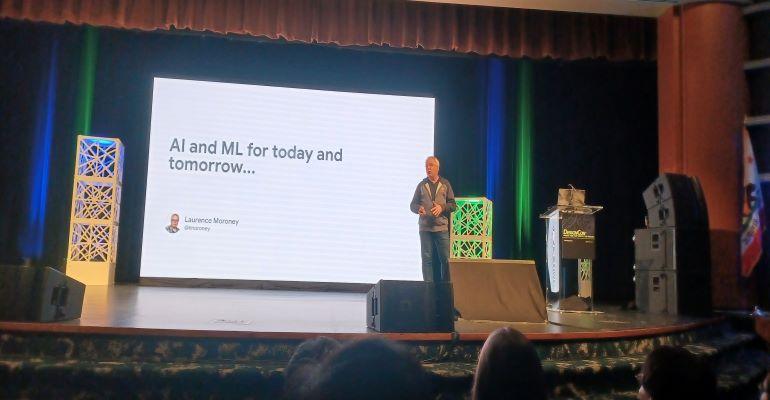 There is no getting away from the fact that artificial intelligence (AI) is shaping the future of many fields, whether it be robotics, medicine, vehicles, and even entertainment. But along with the technology’s great promise are often unrealistic expectations of what AI can accomplish, according to Laurence Moroney, Artificial Intelligence Lead at Google.

At Wednesday’s DesignCon keynote speech, Moroney told a packed audience “We are still early in the AI hype cycle. We will hear various AI promises and expectations, which will set up a trough of disillusionment.”

Moroney noted that there’s no mystery in cutting through the hype, as the time is ripe for developers to go through all the coding and develop explicit coding rules. “Once you start developing, you will realize the constraints of any technology.”

Moroney boiled down the basics of AI development to data. This involved feeding the computer answers and data and allowing the computer to determine the rules. “A machine learning program guesses the data. You then determine how accurate that inference is and then provide more data to optimize that guess.”

Related: Manufacturing is Getting ‘Futurized’ with Artificial Intelligence

At Google, Moroney explained that Google is using an end-to-end open-source platform called TensorFlow, a machine learning program originally developed in 2011 that can be easily deployed across platforms ranging from servers to mobile devices.

The power of this machine learning platform was demonstrated in a Google AI project that helped visually impaired runners finish a course. Called Project Guideline, the early-stage research project, developed in partnership with Guiding Eyes for the Blind, uses machine learning to guide runners through a variety of environments that have been marked with a painted line.

Using a phone running Guideline technology and a pair of headphones, Guiding Eyes for the Blind CEO Thomas Panek was able to run independently for the first time in decades and complete an unassisted 5K in New York City’s Central Park.

Moroney has a long history with AI, which dates back to 1992 when he was part of a short-lived training program in AI in the UK. But that was before the emergence of powerful servers that gave rise to the Internet in the mid-1990s. Moroney fully expects AI to be a disruptive technology, just as the Internet’s emergence and the debut of the smartphone in 2007.