Survey Results: Do You Use Energy Efficient Motors & Drives?

Our survey on energy efficient motors and drives.

I have to admit I've never been a green guy. I’m not talking about leaving the air conditioner running full blast. It’s more that I’ve found the whole field of environmentally friendly technology to be a big yawner. That’s changed recently, because the return on investment (ROI) of energy efficiency has shaken me out of complacency.

It's resonating with Design News readers, too. The results of our survey on energy efficient motors and drives are just in, and they indicate that 88 percent of you anticipate using energy efficient motors and/or drives in your projects in the next 12 months. The main reasons: to reduce power consumption (78 percent), because older motors are no longer cost effective (15 percent), and because your competitors are using them (7 percent).

Lest you think that the only impetus is saving money on factory electric bills, only a quarter of survey respondents are looking at in-house upgrades. Sixty four percent are building the efficient motors and drives into end-user (commercial) products.

Click the image below to view a slideshow showing the results of Design News's survey on energy efficient motors and drives: 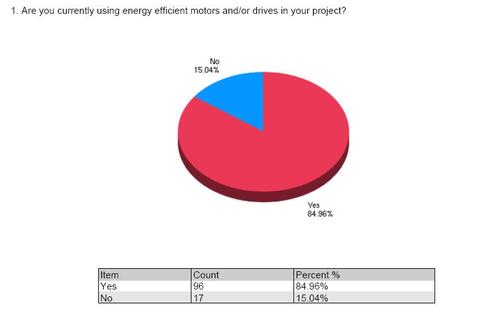 This isn't rocket science. As Ken Kerns, marketing programs manager, Motion Control and Low Voltage Drives at Siemens Industry Inc., told me: "Once you start looking at motor lifecycle costs, something like 95 percent of that is expended on energy costs." Add to that tax incentives, utility rebates, and energy efficient financing, and the upshot is a surprisingly rapid payback -- in some cases as little as eight months, Kerns says.

In less accelerated cases, the tipping point that sways the go/no-go decision is the ability to project an ROI within one to two years. "If you get much beyond that, customers really don’t want to spend the money," Kerns says.

Yet there's more to the efficiency equation than ROI, including the possibility of eliminating equipment stages, and energy recovery.

"A lot of people are trying to get rid of gearing, by going to direct drive motors, which are much more efficient than their induction cousins," explains Craig Nelson, marketing and product manager, Motion Control at Siemens Industry. Cutting out gears and couplings is a win because each additional stage cumulatively eats at efficiency. At the same time, the pricing and availability of direct-drive motors could become a challenge because the rare-earth magnets powering the devices come from China.

Energy recovery is another second-order opportunity that's often getting lost in the rush towards the bigger bang of power savings and ROI. Kerns points to regenerative applications, where large banks of resistors on constant-torque setups can be replaced by regenerative front ends. This recovers the energy that would otherwise be dissipated as heat. "Not only are we able to recover energy, but in some cases we’re able to completely eliminate aspects of the system where we’d be wasting energy," says Kerns.

If you're looking to board the energy efficiency bandwagon, both Kerns and Nelson advise you to consider your application from a holistic perspective encompassing the motor, drives, and duty cycles. "Aspects that some people don’t look at in the purchasing and specifying are the power factor and the harmonics," notes Nelson. "Every drive and motor setup is going to act differently in every different system."