This Report Shows How to Tap Into Nature's Principles for Design

This consulting firm has put together a report detailing the growing biomimicry design field in the US and around the world, from naturally bacteria-repelling surfaces to keratin-inspired polymers.

It has been recognized that this type of approach can often lead to designs that are highly efficient with minimal waste, much like those in nature. Terrapin Bright Green is a consulting firm that specializes in bio-inspired design. A few years back, it was asked by the New York Energy Research and Development Authority to lead an effort with a group of companies to investigate biological design opportunities and come up with energy-saving designs.

At the end of the project Terrapin put together a report that not only summarized in detail what it did with 15 specific companies but also included a broad survey of these types of projects around the world. The resulting document is a newly released report entitled, Tapping Into Nature, which catalogues the efforts of dozens of companies that have also been working on what’s also known as biomimicry. The report is an excellent reference, and quite possibly a source of inspiration, for anyone working in the product design arena and looking for innovative materials to work with or a way of implementing a design that takes a page out of nature’s book. After all, who would know better about filling certain functional niches than those organisms that have evolved over billions of years? 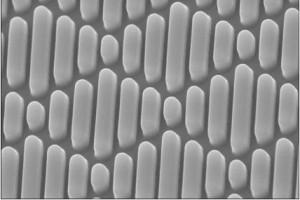 This surface finish is designed to repel bacteria naturally like sharkskin does.
(Source: Terrapin Bright Green)

The report is well-organized, with an infographic-style grid that shows the ideas arranged by area of application on one axis and the stage of development, ranging from: concept, to prototype, to development, to in the market on the other.

In an interview with Design News, Cas Smith, a biological engineer at Terrapin, who has spoken with the publication before, said there are two types of bio-inspired design: those that use components that are actually grown, and those that emulate natural processes, materials, and structures. This is captured in the preamble, with a quote by R. Buckminster Fuller: “I’m not trying to imitate nature; I’m trying to find the principles she’s using.”

When asked about some of his favorite applications, particularly for materials, described in the report, he mentioned Ecovative, which uses mycelium bio-based packing material derived from mushrooms as a natural alternative to Styrofoam, both for packaging and insulation.

Materials that grow in nature almost always utilize carbon dioxide in the process, providing a level of carbon sequestration. Said Smith, “Figuring out how to use CO2 as a source material is really meeting the climate change challenge head on.”

Then there was the design of plastic injection molds for enhanced resin melt cooling based on the design of vascular plants. This was implemented by Harbec Inc., which used a direct metal laser sintering (DMLS)-type 3D printer to create the molds with a network of internal channels. This led to a 21% improvement in cycle time, reducing cost. Similar principles are also used in Ceralink's additive manufacturing products. 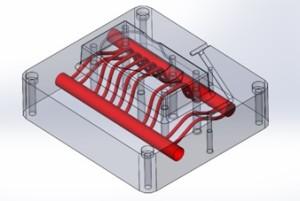 Other materials described that are in the market include everything from Velco, to Sto-Coat Lotusan exterior acrylic wall coating that mimics a lotus leaf, to Sharklet, which is a surface finish for medical devices inspired by sharkskin that naturally repels bacteria without the use of antibiotics.

In the concept and prototype stages are a number of materials including a form of surgical glue inspired by the construction technique of sandcastle worms, bio-adhesives that mimic mussels, and keratin-inspired polymers.