A recycling center in the Sunset Park neighborhood of Brooklyn, NY, has deployed the city’s first commercial-scale wind turbine, providing a good test bed that could pave the way for similar deployments in the future.

Standing 160 feet tall, the turbine sits on the 30th Street Pier on the Brooklyn waterfront at the Sunset Park Material Recovery Facility (MRF) of Sims Municipal Recycling, the principal sorting and separation center for the city’s residential metal, glass, and plastic recyclables.

The turbine -- manufactured by Vermont-based Northern Power Systems -- has a capacity of 100kW and cost $750,000, which Sims expects to recuperate over a five-year period, the company said. 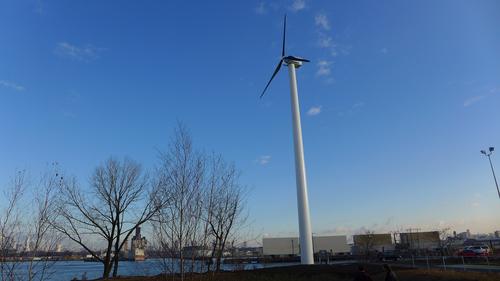 Aegis Renewable Energy installed the turbine last year after a four-year process to receive permission from the city to deploy it.

The turbine is not the first effort the facility has made to use alternative sources of energy. Sims already has deployed a solar-power installation on the roof of one of its buildings that generates about 16% of the facility’s energy.

Combined with the 4% of energy for the facility Sims expects the turbine to provide, up to 20% of the MRF’s energy will now be from alternative sources on site at the facility, said Tom Outerbridge, general manager of Sims Municipal Recycling, in a press release.

“As a recycling company, sustainability is central to our mission, and in Brooklyn, we saw the opportunity to advance that agenda in new ways,” he said. “The wind turbine, combined with the solar array, enables the facility to decrease its non-renewable energy consumption substantially.”

The facility’s site on the waterfront makes it a prime location for a turbine because of the type of wind it receives there. While winds throughout the city can be unpredictable, wind along the harbor is steadier, Outerbridge told Design News in an interview. “With unobstructed access to the harbor, we have relatively consistent winds,” he said.

While the largest farms of commercial-scale wind turbines remain in rural areas, cities are beginning to find ways to harness wind energy as well. Outerbridge told us that the Sunset Park turbine is not the only turbine in New York City -- there are smaller units at a Whole Foods in the Gowanus neighborhood in Brooklyn, as well as at an apartment building in Queens.

However, there is nothing on the scale of the Sims turbine yet in the city, but that could change now. “At least we have demonstrated it can be done within the confines of NYC,” Outerbridge said.

Creative entrepreneurs are beginning to find innovative ways to put turbines in urban environments, as well. In France, for example, entrepreneur Jérôme Michaud-Larivière formed the company New Wind to develop a wind turbine -- or a combination of them -- in the shape of a tree to provide wind energy to cities. Called Wind Tree (or L’Arbre a Vent, the original French name), the new technology will have its first public exhibition March 12 to May 12 in Place de la Concorde in Paris.