Nanowires recently proved to have helped develop a capacitor that could last 400 times longer than typical energy-storage devices and batteries. Now a Swedish-based advanced materials startup has developed similar technology it said can boost solar module-conversion efficiencies to record levels.

Nanowires—about .00008 inches in length—concentrate the sunlight without the use of optics or mechanical components. Though nanowires cover just a small percentage of the surface area of a solar cell, they can help it gain substantial increases in efficiency, according to the company. 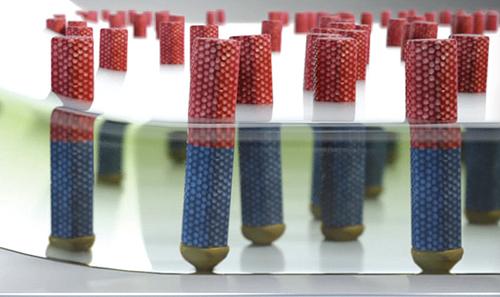 Swedish startup Sol Voltaics is developing gallium arsenide (GaAs) nanowire and incorporating it into a thin film technology called SolFilm. The company said that when the technology is added to solar panels, it can enable them to achieve record efficiencies of 28 percent and higher.
(Source: Sol Voltaics)

Sol Voltaics recently unveiled a breakthrough in preparing its technology for the commercial production of solar films for tandem solar photovoltaic (PV) modules with the successful alignment and orientation of nanowires in a thin film, said company CEO Erik Smith.

This is significant because, despite their highly promising characteristics in solar-energy generation, nanowires are notoriously difficult to align due to their high aspect ratios and material characteristics, he said. By controlling nanowire orientation and alignment at centimeter scale on standard-sized wafers, Sol Voltaics has taken a major step toward the commercial production of solar films for tandem solar PV modules, Smith said.

“This latest announcement of nanowire alignment is their most significant technological achievement to date and a major step in its path to mass producing its technology,” he told Design News in an interview.

Sol Voltaics to date has the world-record for photovoltaic conversion efficiency using a GaAs nanowire array, demonstrating a 1-sun conversion efficiency of 15.3 percent in a GaAs NWA solar cell, as verified independently by Fraunhofer Institute for Solar Energy Systems, a leading European solar-energy research think tank. The organization recently retested the cells, which showed little or no degradation nearly 18 months after the initial tests. This reaffirms the technology’s performance reliability, according to Sol Voltaic.

SolFilm is not ready for prime time, however. Smith said it still has a few further hurdles to overcome, which the company plans to do throughout the year. Sol Voltaic expects the first film samples of their technology to be delivered to PV cell and module partners in the latter part of 2017 and early 2018, he said.

Smith said as the technology evolves, it has the potential to bring significant benefits to different aspects of the solar industry, from manufacturers to utilities to users themselves.

Elizabeth Montalbano is a freelance writer who has written about technology and culture for more than 15 years. She has lived and worked as a professional journalist in Phoenix, San Francisco and New York. In her free time she enjoys surfing, traveling, music, yoga, and cooking. She currently resides in a village on the southwest coast of Portugal.