Hyundai Motor America took a small step into the futuristic world of fuel cells last week, handing over the keys to the first customer of its hydrogen-powered car.

Known as the Tucson Fuel Cell CUV, the new car is said to be the first mass-produced vehicle of its type. Hyundai plans to build and lease approximately 1,000 of them by the end of 2015.

Experts caution, however, to not read too much into the event. “For the average consumer, this isn’t going to be a viable option in the near term,” Cosmin Laslau, research analyst at Lux Research Inc., told Design News. He added that the cost of hydrogen fuel is still too high, infrastructure too sparse, and the vehicle itself too costly. 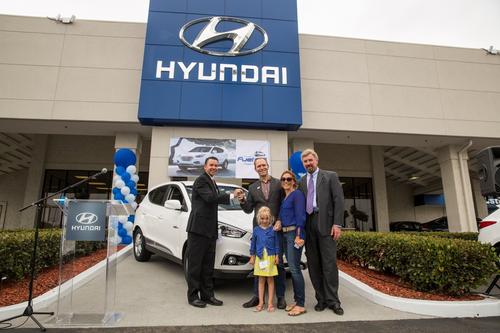 In a ceremony at a California dealership, Hyundai executives handed the keys to the first customer of the Tucson Fuel Cell CUV.
(Source: Hyundai Motor America)

Hyundai is believed to be absorbing much of the initial cost of the cars. It leases them for $499 per month to Californians, who must live within range of nine hydrogen refueling stations, mostly in Los Angeles and Orange Counties. The lease term for the vehicles is three years, 36,000 miles.

Lux Research expects production of such cars to be miniscule until the initial cost comes down. “The vehicles need to get to a price point of $30,000,” Laslau told us. “Right now, we believe they are a factor of two to three times more than that.”

In a press release, Hyundai said it introduced the Tucson Fuel Cell “to alleviate the limitations of traditional battery electric vehicles.” The new vehicle offers a driving range of 265 miles, is capable of refueling in less than 10 minutes, and exhibits minimal cold weather effects, making it a superior alternative to an electric car with a big battery, the company claims.

But much remains before fuel cell vehicles can compete with battery-electric cars. Refueling stations are virtually non-existent in most parts of the country, making it almost impossible for automakers to sell the vehicles in many locales. Moreover, the cost of stations is believed to be as much as $1.5 million apiece, making the uptake more difficult.

”For the infrastructure to get started, there’s going to be a huge bill to be paid, and it’s unclear who will be willing to foot that bill,” says Laslau.

For its new Tucson Fuel Cell customers, Hyundai has announced it will pay all refueling and maintenance costs. The company considers that action appropriate, given the fact that hydrogen infrastructure is still being built out.

Hyundai is one of several automakers now working on fuel cell vehicles. Honda recently rolled out a concept fuel cell vehicle and announced plans to launch a hydrogen-powered production car by 2015. Similarly, Toyota has said it plans to market a fuel cell car in 2015. And General Motors has entered into a collaborative arrangement with Honda to develop next-generation fuel cells and hydrogen storage technologies for the 2020 time frame.

Still, automakers recognize that the road to widespread fuel cell success will be a long one. “For hydrogen vehicles to be attractive, they will have to hit some very aggressive price points,” Laslau tells us. “We don’t see that happening in the near term.”

Your direct link to advanced design and manufacturing products and suppliers
Search for products & manufacturers:
Next Class: Coming Soon
END_OF_DOCUMENT_TOKEN_TO_BE_REPLACED

Please wait a moment while we find a poll.
END_OF_DOCUMENT_TOKEN_TO_BE_REPLACED