Researchers have found a way to use graphene to cheaply and easily turn dirty water into drinking water.

Graphene oxide has become a miracle material of sorts for a wide range of applications, particularly in energy-harvesting applications, additive manufacturing, and to make other materials stronger and more durable. Engineers at Washington University in St. Louis have also found another use for the versatile graphene -- to turn dirty water into water suitable for drinking.

The team is using graphene oxide sheets in combination with bacteria-produced cellulose to form a bi-layered biofoam. This biofoam, which is light and inexpensive to make, purifies and desalinates the water for drinking.

Researchers, including Srikanth Singamaneni, associate professor of mechanical engineering and materials science at the School of Engineering and Applied Science, aims for the technology to be applied in places where there is a lot of sunlight but a dearth of clean drinking water, such as India.

"We hope that for countries where there is ample sunlight, such as India, you'll be able to take some dirty water, evaporate it using our material, and collect fresh water," he said. 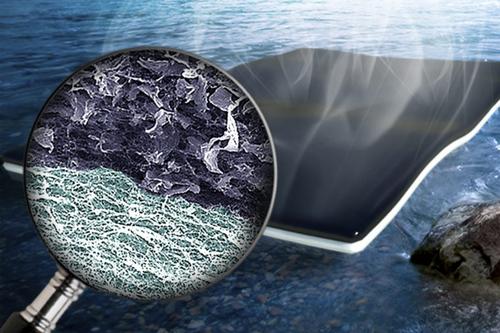 "Light radiates on top of it, and it converts into heat because of the graphene oxide -- but the heat dissipation to the bulk water underneath is minimized by the pristine nanocellulose layer,” he said. “You don't want to waste the heat; you want to confine the heat to the top layer where the evaporation is actually happening."

The cellulose at the bottom of the bi-layered biofoam acts like a sponge, to draw the water up to the graphene oxide for rapid evaporation, he said. Someone can then collect the resulting fresh water from the top of the sheet.

Researchers also came up with a novel way to form the bi-layered biofoam, which is similar to how an oyster makes a pearl, Singamaneni said. The bacteria forms layers of nanocellulose fibers in which the graphene oxide flakes get embedded.

"The graphene oxide becomes embedded as the bacteria produces the cellulose,” he said. “At a certain point along the process, we stop, remove the medium with the graphene oxide, and reintroduce fresh medium. That produces the next layer of our foam. The interface is very strong; mechanically, it is quite robust."

Singamaneni and his team published a paper about their work in the journal, Advanced Materials.

The benefits of the technology, aside from the obvious creation of fresh water, include the relatively abundance and inexpensive nature of the materials used in the process, Singamaneni said.

Cellulose is easy to produce on a “massive scale,” Singamaneni said, and graphene oxide is extremely inexpensive. “People can produce tons, truly tons, of it,” he said. “Both materials going into this are highly scalable. So one can imagine making huge sheets of the biofoam."