Researchers have identified a unique structure in the mantis shrimp's dactyl club that can inform the design of stronger materials.

Researchers exploring biomimicry -- or how nature influences design -- have found unique inspiration in crustaceans to provide clues for developing stronger materials. For example, researchers have studied prawns for chitin, a long-chain polysaccharide polymer found in their shells that’s responsible for their rigidity and toughness, to develop a strong, moldable bioplastic.

The mantis shrimp (also known as smashers) is one of the latest of these creatures at the center of this type of research, with a team from the University of California, Riverside (UCR) and Purdue University identifying a structure within the shrimp’s dactyl club -- a fist-like appendage it uses to crush the shells of its prey -- that can be mimicked in composite materials with applications from armor to the automotive industry. 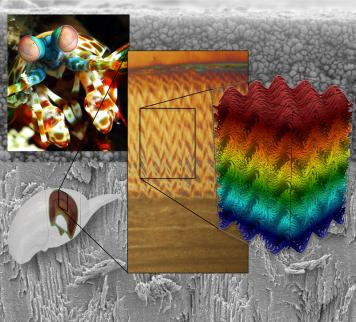 This graphic shows a unique herringbone structure in the dactyl club of a mantis shrimp identified by researchers at the University of California Riverside (URC) and Purdue University.
(Source: UCR)

David Kisailus, a professor in energy innovation in UCR’s Bourns College of Engineering, and his team have been studying smashers’ dactyl clubs for eight years to develop next-generation composites. Kisailus has even spun out a startup from the university’s Office of Research and Economic Development called Nature Inspired Industries to develop some of these materials.

“The smasher mantis shrimp has evolved this exceptionally strong and impact-resistant dactyl club for one primary purpose -- to be able to eat,” he said. “However, the more we learn about this tiny creature and its multi-layered structural designs, the more we realize how much it can help us as we design better planes, cars, sports equipment, and armor.”

The particular area of focus for the study was a type of mantis shrimp -- also known as a stomatopod -- because of the way it kills hard-shelled prey such as crabs and snails by pulverizing them with speed and force. This is thanks to the dactyl club, which can reach an acceleration of 10,000g to deliver impacts equivalent to the speed of a unleashing a .22 caliber bullet, researchers said.

The current work has for the first time identified a unique herringbone structure within the dactyl club’s outer layer, or impact region, a crack-resistant layer that protects the club as a mantis shrimp batters its prey. A crystalline calcium phosphate -- which is also found in human bone -- comprises this region, surrounding organic chitin fibers. These fibers are what form the structure, which not only protects the club but also provides more momentum for pummeling prey, Kisailus said. It’s also stiffer than what is found in the other region of the dactyl club, called the periodic region.

While researchers have not confirmed the mechanism of the formation of the structure, Kisailus has speculated that a redistribution of stresses enabled by the structure is what gives the dactyl club its strength and force. The team then worked with Pablo Zavattieri, associate professor of civil engineering at Purdue, to perform further analysis and fabricate the herringbone structure using synthetic materials and a 3D printer to confirm what they believed to be true.

Using computational models replicating the local details of the herringbone structure, researchers saw how damaging stress can be more uniformly distributed so as to prevent overall failure of the structure, they said. Compression testing of the 3D-printed composite also helped prove that the herringbone structure makes the impact region even more effective than the periodic region in redistributing stress and deflecting cracks.

Researchers published a paper about their latest work, which was funded by the Air Force Office of Scientific Research under a $7.5 million Multi-University Research Initiative, in the journal, Advanced Materials.

“By using 3D printing techniques like those used by Zavattieri’s team, we can actually take what we’ve learned about the architecture of the dactyl club and manufacture new composites with traditional engineering materials like polymers and carbon fiber,” Kisailus said. To that end, the team already is fabricating a second generation of materials inspired by their work, having produced a prototype helmet made with the hard coating. They will continue to develop new composites using what they’ve learned, he added.