The Launch of Apollo 11 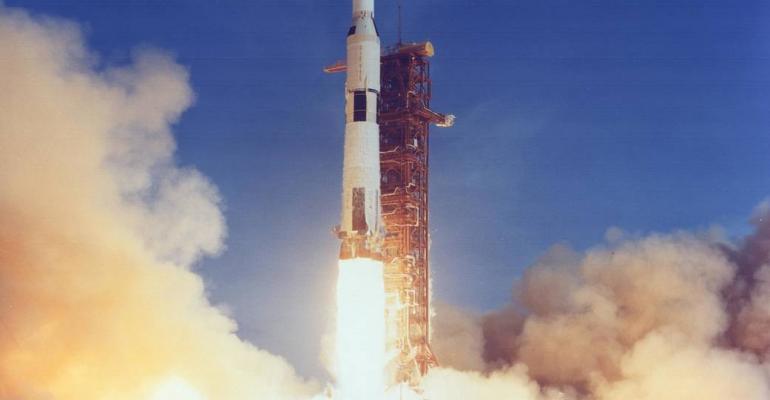 SPACE WEEK 2019: One of the most remarkable voyages in human history began 50 years ago on this date.

It began at 9:32 am Eastern time on July 16, 1969. The mighty Saturn V rocket launched the Apollo 11 spacecraft from Pad 39A at the Kennedy Space Center in Florida. On board were mission commander Neil Armstrong, Command Module pilot Michael Collins, and Lunar Module pilot Edwin “Buzz” Aldrin. Apollo 11 would be the third time that astronauts would leave Earth orbit—Apollo 8 had orbited the moon in December of 1968, and in May Apollo 10 had served as a dress rehearsal, orbiting the moon and testing the systems and lunar lander without actually touching down on the lunar surface. Now, all was ready for humans to set foot on the moon.

2 hours, 44 minutes into the flight, after one-and-a-half Earth orbits, the S-IVB third stage of the Saturn V reignited for a second burn of 5 minutes, 48 seconds. The thrust served to place Apollo 11 into a translunar orbit. Then, the command and service module, or CSM, named “Columbia” separated from the third stage. Columbia rotated around to face the spacecraft-lunar module adapter, or SLA, which contained the lunar module, or LM, named “Eagle”. Columbia and Eagle docked for the first time and the lunar module was extracted from the SLA. The S-IVB stage separated and another firing of its rocket injected it into heliocentric orbit 4 hours, 40 minutes into the flight.

Apollo 11 was on its way to the moon!