The United States may not have won the Space Race had it not been for the contributions of three African-American women.

World War II left the US with a shortage of male labor, leading various federal agencies to begin hiring women. In 1941, President Franklin Roosevelt signed Executive Order 8802 into action -- creating the Fair Employment Practices Committee and prohibiting race-based discrimination in hiring for defense industry jobs. Coupled with high demand for mathematicians in the defense industry at the time, it was a perfect storm of political factors that opened up new career avenues for African-American women.

One of the agencies that brought in female mathematicians was the National Advisory Committee for Aeronautics (the NACA, which would be dissolved and reformed into NASA in 1958). The NACA created a pool of female mathematicians (internally referred to as "the computers who wore skirts") at the Langley Research Laboratory in Hampton, VA. At the time if you heard the term "computer" it was likely in reference to a person who performed calculations and not a machine.

In hiring women, the thinking at the time was that women's smaller hands and attention to detail made them ideal for the sort of repetitive mathematical work that NACA required of them. Of course the women were also paid less than their male counterparts. The salary capped out at about $2,000 a year (about $20,000 today), 40% less than what white males were paid for the same work. And women were never allowed to tackle the larger conceptual and analytical work. They basically did the grunt math work for the male engineers at a time when slide rules and pencils were the dominate tools of the trade.

The Astronaut as Engineer. Come hear George Leopold talk about NASA's beginnings and one engineer's pivotal role in winning the Space Race in his keynote at the Embedded Systems Conference. Sept. 21-22, 2016 in Minneapolis. Register here for the event, hosted by Design News’ parent company UBM.

But even among the female workers racial lines were drawn. This was a time when Jim Crow laws were still in effect, segregating African-Americans under the auspices of "separate but equal." African-American women were sequestered into the west area of the Langley campus - earning them the collective name, The West Area Computers. Adding further irony to the situation was the fact that the land the West Area was built on was still partially registered as a plantation. Yes, the African-American women mathematicians technically worked on a plantation.

The West Area Computers attracted talented graduates from some of the nations top historically black colleges including Virginia State, Hampton Institute, and Wilberforce University. And as the launch of Sputnik heated up the Space Race, mounting pressure beat Russia to the moon, the West Area Computers would make significant contributions to the aerospace industry as well as the Civil Rights Movement.

Three of them in particular, Katherine Johnson, Dorothy Vaughan, and Mary Winston Jackson are especially noted for their contributions and will be subjects of the Hollywood film, Hidden Figures, starring Taraji P. Henson, Octavia Spencer, and Janelle Monae in the respective roles. The film, based on an upcoming book by Margot Lee Shetterly is set to hit theaters in January 2017.

Who were these three women who played a pivotal role in America's space program?

In 1953 Johnson's pursuit of a career in mathematics brought her to NACA, where she became part of the West Area Computers, working on calculations for guidance and navigation systems. For the next five years Johnson's work caught the attention of her supervisor and fellow mathematician Dorothy Vaughan, who pushed for Johnson to be re-assigned to Langley's Flight Research Division in 1958 when NACA transitioned to become NASA.

When NASA formed its Space Task Force - charged with getting an American astronaut to the moon, preferably sooner than later, Johnson was the only non-white, non-male member of the team. During her time there her trajectory calculations were vital to the success of several historic space missions, including the Mercury missions of Alan Shepard and John Glenn, as well as the Apollo 11 moon landing. When tragedy struck the crew of Apollo 13, Johnson was among the team of engineers working on solutions to bring the astronauts home safely.

In an 2011 interview with WHROTV, a Hampton, VA public access station, Johnson recalled that though NASA had begun using computers (machines, not people) for calculations during her time there, the feeling was that the mathematics performed by humans was more reliable. Mathematicians like Johnson were often called to double-check the work of the machines. "When [John Glenn] got ready to go up he said, 'Call [Johnson], and if she says the computer is right I'll take it.' " Johnson told WHROTV.

Johnson retired from NASA in 1983 and, despite the political climate in which she did her work, she told a WHROTV interviewer that she didn't really feel discriminated against at NASA. "I didn't feel the segregation at NASA, because everybody there was doing research," Johnson said. "You had a mission and you worked on it and it was important to you to do your job."

Katherine Johnson still resides in Hampton at the age of 98. In 2015 she was awarded the Presidential Medal of Freedom, the nation's highest civilian honor, for her lifetime of work. In a press release from NASA about Johnson's honor, Charles Bolden the current administrator of NASA (and the first African-American to hold the position) said, "Katherine's legacy is a big part of the reason that my fellow astronauts and I were able to get to space; it's also a big part of the reason that today there is space for women and African-Americans in the leadership of our nation, including the White House." 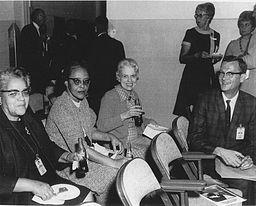 Dorothy Vaughan (pictured right alongside other "human computers" at NACA). graduated from Wilberforce University with a degree in mathematics and worked as a high school math teacher until she was hired by NACA in 1943. While working at the Langley Research Center, Vaughan eventually became the head of the West Area Computers, with a number of talented female mathematicians working underneath her - including Katherine Johnson. Well respected in her role, Vaughan was often tapped to recommend women for various projects throughout the organization. It was this position that allowed her to recommend mathematicians like Johnson toward the prestigious work they would later take on.

A gifted mathematician in her own right, Vaughan headed up the West Area Computers for nearly 10 years. In 1958 the formation of NASA also brought an end to the segregated work units on the Langley campus. Vaughan and many other former members of the West Area joined NASA's Analysis and Computation Division (ACD), a racially and gender-integrated group focused on research around data communications and networking. Today it is known as the Office of Chief Information Officer (OCIO) and focuses on IT technology, including cybersecurity.

As a member of the ACD, Vaughan became a specialist in FORTRAN programming (which was a relatively new programming language at the time) and contributed to the Scout Vehicle Launch program for launching satellites into orbit. Vaughan retired from NASA in 1971 and passed away in 2008 at the age of 98. 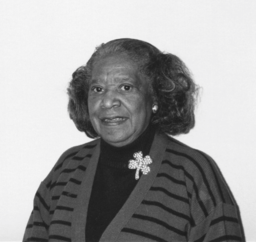 Mary Winston Jackson graduated from Hampton Institute in 1942 with degrees in mathematics and physical science. Like Vaughan she was a school teacher until she was hired by NACA in 1951 as a member of the West Area Computers (supervised by Dorothy Vaughan). In 1953 she moved to NACA's Compressibility Research Division, which focused on high-speed flight and had already built the X-1, the first of NASA's various, famed X-Plane projects.

Jackson's work focused on analyzing data from real-world flight and wind tunnel experiments. After the formation of NASA in 1958, Jackson joined a special training program, after which she was promoted to an aerospace engineer and focused her work on aerodynamics research.

More than her research however, Vaughan is remembered as a champion in helping women and minorities advance their engineering careers. She was known to encourage women and minorities to undertake the necessary training to have their job function upgraded from "mathematician" to "engineer," so that more career opportunities would be available to them.

Jackson worked as an engineer at NASA for 34 years. She eventually shifted her career away from engineering and served at NASA as the Federal Women's Program Manager in the Office of Equal Opportunity Programs and as the Affirmative Action Program Manager until her retirement in 1985. Jackson passed away in 2005 at the age of 83 leaving behind a legacy as a trailblazer in helping African-American engineers find employment in the aerospace industry.

Watch the trailer for Hidden Figures:

Your direct link to advanced design and manufacturing products and suppliers
Search for products & manufacturers:
Next Class: Coming Soon
END_OF_DOCUMENT_TOKEN_TO_BE_REPLACED

Please wait a moment while we find a poll.
END_OF_DOCUMENT_TOKEN_TO_BE_REPLACED