HomeIndustryAerospaceThe Batteries That Powered the Lunar Module
Recent
Industry
Researchers Use AI and Stimulation to Strengthen the Brain
Nov 30, 2021
Carbon-Fiber Composites on a Roll in Auto Wheels
Nov 30, 2021
Our First Drive in the Lucid Air EV
Nov 30, 2021
How to Build a Better Industrial Automation System Using PLCs
Nov 30, 2021
POLL
Getting Started with Cpputest for Embedded Applications
Nov 30, 2021
Opportunities for High-Performance Polymers in the Semiconductor Space
Nov 30, 2021
Meet the Most Comfortable Keyboard on the Planet
Nov 30, 2021
Mobile Plastic-Waste Upcycling Platform a Finalist in World Design Awards
Nov 30, 2021

The Batteries That Powered the Lunar Module 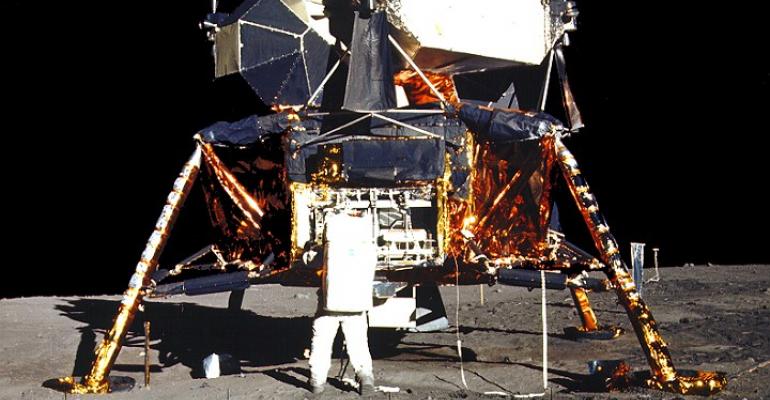 SPACE WEEK: Landing on the moon took a huge amount of engineering skill, not the least of which went into developing the batteries that would provide electricity on the lunar surface.

When President Kennedy proposed, on September 12, 1962, that the US land a man on the Moon before the end of the decade, he set in motion a huge scientific and engineering enterprise. Eventually more than 400,000 engineers and technicians would contribute to the effort—not only at NASA, but at companies that served as contractors around the country.

The design and development of the Lunar Module (LM) was the responsibility of Long Island, New York aviation pioneer Grumman. The role of the LM was to transport two astronauts from lunar orbit, support them while on the Moon, and then to return them and their Moon rock samples to a rendezvous with the Command Module (CM).

Right from the start, it was decided that the LM would have two stages, each with its own rocket engine and power systems. The descent stage rochet was highly controllable and could be throttled to allow the LM to hover just before landing. The ascent stage rocket engine was much simpler—once it ignited it held a single level of thrust until it was shut down. This was done to make the ascent stage as reliable as humanly possible—if the ascent stage engine did not fire there would be no rescue and the two astronauts would die on the surface of the Moon.

Size and weight became the critical factors in the LM design. Every ounce of the spacecraft had to be launched from the Earth by the Saturn V rocket, and the original design, which had weighed 22,000 pounds, eventually ballooned to nearly 34,000 pounds by the time it flew with Apollo 11. For the Grumman team of 7,000 employees, led by Thomas J. Kelly, the LM Chief Engineer, reducing weight in a spacecraft that was not much larger inside than a phone booth was a major challenge.

Initially, the plan was to provide electrical power for the LM through a hydrogen fuel cell. In February 1965, after months of study, NASA approved a switch from fuel cells to batteries. Thomas Kelly in his 2001 book, “Moon Lander: How We Developed the Apollo Lunar Module,” NASA had become increasingly concerned about the growing complexity of the fuel cell system in the LM. The Command Module would continue to use fuel cells for electrical power because of its longer mission duration. But the LM only needed its electrical power for a couple of days and the simpler battery system was attractive.

The battery supplier for the LM was Eagle Picher. The company had already been supplying batteries to the military for a long time and with the space program all the way back to the first satellite launched by the US, the Explorer I. In addition, the company was already supplying more than 40 batteries for the Saturn V rocket.

The chemistry for the batteries was chosen for its reliability and familiarity. “All of these were silver oxide-zinc batteries,” Jack Brill explained to Design News. Brill was the project engineer for the Apollo program for Eagle Picher. “I actually started work in 1962- about the time everything kicked off,” said Brill. “I was a young guy, just out of college. I graduated with a mechanical engineering degree and started work in 1962. When I first started I did a lot of mechanical design work. The Vietnam War was kicking off really strong at that time, and I started working on critical batteries for the military. I was the project engineer on the Apollo battery. I was the mechanical design and manufacturing engineer for the Lunar Module batteries,” Brill told us.

“The whole goal was lightweight. There was a lot of design to take the weight out. We broke a lot of ground there—in fact we started using titanium cases. The main thing was to get the weight out. We went from stainless, to magnesium, to titanium. They would take a small number of recharges— 25 times or so—but they were never intended for that,” Brill said.

There were four batteries in the descent stage of the LM and two more to power the ascent stage. The batteries had alternating plates of silver and zinc, separated by paper insulation and surrounded by a liquid potassium hydroxide electrolyte.

The success of the Apollo 11 Moon landing led to more work for the Eagle Picher space battery designers. “I spent almost my whole life there. I was there when the space industry started. I built different batteries for different experiments on the Moon. We built batteries for the lunar rover, “said Brill. “I retired after 52 years, in 2014. I stayed longer than I meant to! I finished as the Director of Engineering, but all the way through I was involved in space,” he added.

What does it mean to Jack Brill, looking back 50 years to his involvement with the first Moon landing? “At the time we were just so busy doing the job and our goal was to never make mistakes,” Brill told us. “It’s nerve-wracking when something you do might kill somebody. When I look back, there was a lot of achievement that I was part of—I came along at the right time and I saw a lot of wonderful things. I saw a lot of launches…”