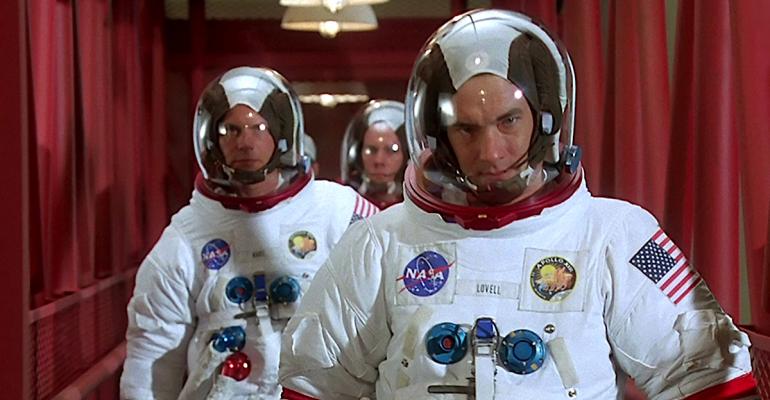 April 11, 2020 is the 50th anniversary of the launch of NASA’s Apollo 13 lunar mission, and this year is also the 25th anniversary of the 1995 film version, directed by Ron Howard. It is this theatrical version of events that is the definitive story of Apollo now for many people, an outcome that was predicted at the time of the movie’s filming by Apollo 15 astronaut Dave Scott, who served as a consultant on the film.

“I don’t think anybody’s going to go to the moon for a long time,” Howard recalled Scott telling him. Speaking for the bonus features on the Collector’s Edition DVD, Howard told the story of Scott’s prediction that future moon voyagers would look back at the film as documentation of the Apollo era.

Hollywood isn’t known for its keen study of the outside world, but a book proposal by astronaut Lovell caught the attention of people who brought the story to director Howard. “The more I kept learning about the actual mission,” he said, “the more I realized just how dramatic the truth, in this particular instance, is.”

He soon recruited A-lister Hanks to play Lovell. “There’s something about the story of getting back home, which is one of the seven great stories of literature: How do you get back home? And that’s what this is,” Hanks said.

As a longtime space geek, Hanks was already predisposed to favoring the film. “I’ve always wanted to play an astronaut. I’ve always wanted to shoot a vast section of a movie completely encapsulated by nothing but metal, glass and switches, and I finally had a chance to do that,” he said. “This is real dream-come-true stuff here.”

1995 marked the dawn of computer-generated animation, and Apollo 13 uses the early technology to good effect to create some flight scenes. Fortunately, the production crew recognized the shortcomings of CGI and limited its use. For the dramatic splashdown scene near the end of the film, they employed a scale model of the command module on real parachutes, dropped from a helicopter to provide the necessary realism.

But the real challenge was replicating the zero-gravity environment inside the spacecraft during the flight. To gain some insight into this, the cast and crew arranged for a flight in NASA’s zero-g simulating KC-135 cargo aircraft. The experience motivated Howard to investigate actually building sets inside the plane and shooting the movie inside it during zero-g flights.

“If we really would have had to try to create the weightlessness with wires (on the actors), I sort of shudder to think what the movie would have really looked like,” Howard said.

Instead, the cast flew 612 25-second cycles in the Vomit Comet, totally 3 hours and 54 minutes of weightlessness. “The KC135 was used for most shots where you see our whole bodies,” explained Bacon. “Then we did a lot of the closeups on the ground, and they cut amazingly well. I can’t even remember if this is a KC135 shot or this is a ground shot.”

“Nobody wanted to let this story down,” Howard stated. “Not the actors, not the crew members, no one. I didn’t have to make any motivational speeches on this one. People were coming to work every day ready to give a hundred and fifty percent.”

“I had an acute sense of anxiety that I would be the one who became violently ill and totally incapacitated and a failure to the group,” said Paxton.

Further, with expert advice available, the actors could be confident that they weren’t doing anything grossly unrealistic. “I’m really impressed with the authenticity of how we’re doing this,” observed Apollo 15 commander Dave Scott. “They are interested in getting this accurate and precise, down to not only the word, but the inflection of the word, and the meaning behind the word.”

“With Dave Scott from Apollo 15 here every day,” said Hanks, “we don’t have to do that thing that can happen in films where the director says, ‘Flick some switches.’”

“Working on the film was kind of like cramming for your final exam or something,” said Ed Harris. “You’ve got all this information in your head, you’re really focused on it, you’re doing your homework the night before about the scene you’re going to do the next day.”

Nevertheless, the film’s defining characteristic turned out not to be the heroism of the astronauts, but that of the engineers on the ground who fought to find a way to save the astronauts. Apollo 13 made stars of engineers and brought the phrase “Failure is not an option,” into popular culture.

“One of the first things that we did once we committed to making the movie was go to Houston, see mission control,” said Howard. “And I realized just how intense it was. How personally they took it. And I began to try to find ways to tell their story too.”

“Once the rocket leaves the launch pad, the flight director, he’s God,” Harris noted. “He’s got more power than the President of the United States at that point. He calls the shots.”

Howard put the same attention to detail that went into shooting authentic weightless scenes into recreating NASA’s mission control in Houston. “Ron is an absolute fanatic about every little detail being correct,” said Apollo 13 flight dynamics officer Jerry Bostic, who consulted on Apollo 13 and worked on the set daily. “I spend 14 hours a day here and I leave and I go look for the elevator,” he laughed. “Because the real control center in Houston was up on the third floor, and I forget because this thing is so real.

“You have a great story and you have all this incredible technology and you have something that was very important historically,” observed Bacon. “This moment was, in so many ways, NASA’s finest hour.”

For engineers, the film Apollo 13 might have been their finest hour too.