6 Tips for Raising a Kid to Love STEM 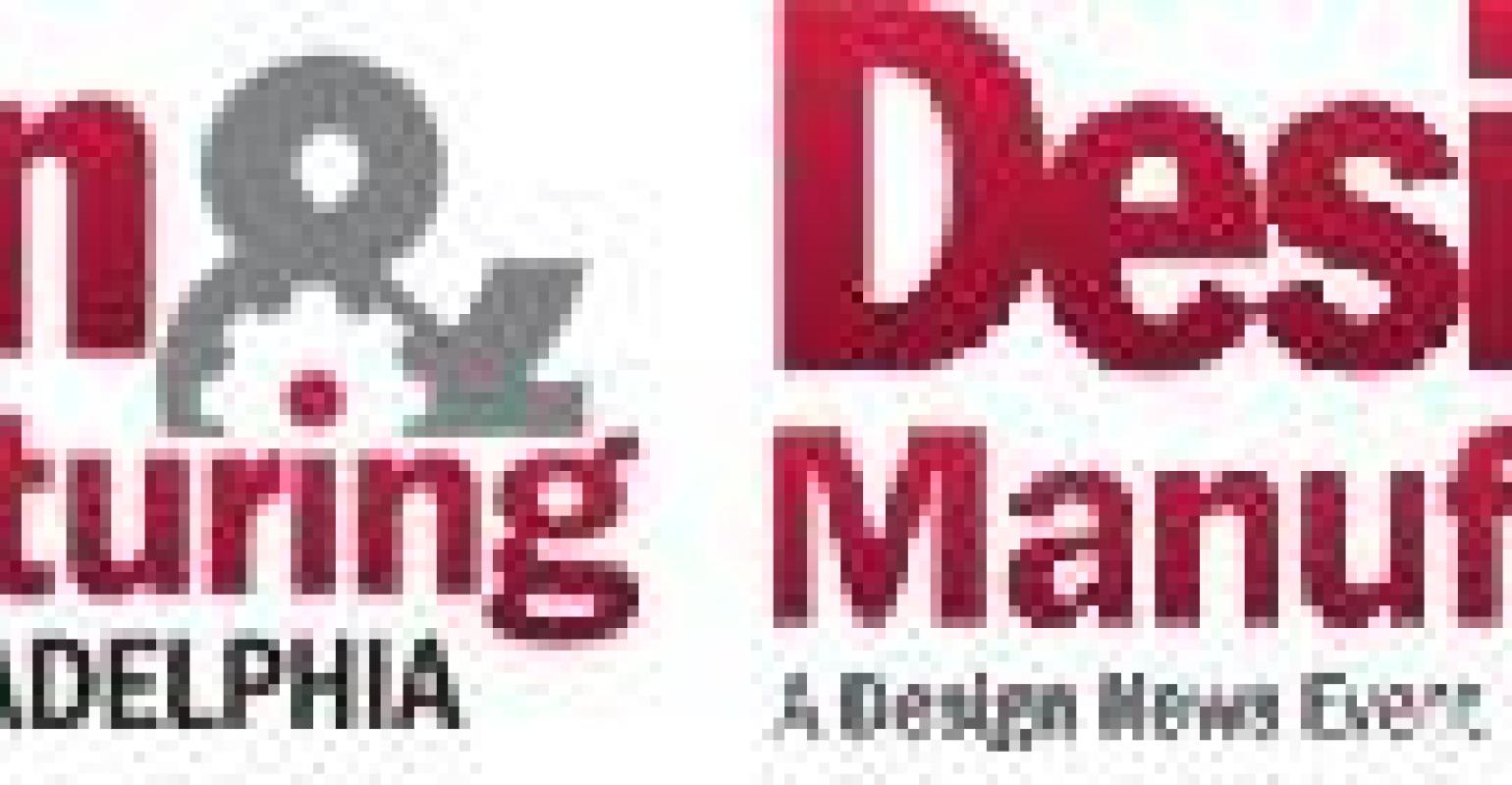 I think we would all agree how important it is to encourage STEM education for the future of our country. We want our children to be successful, and by teaching them to be curious, innovative, and to utilize critical thinking at a young age, we can set up a roadmap for their success in STEM education by fueling a constant fire that encourages them to be STEM minded not only at school, but as a lifestyle. The question is, how as parents do we do that? My husband and I are both engineers, and what we have tried to do is bring the excitement of STEM to anything we are doing. In this article I am going to share examples of how we have accomplished that in our own family.

1.) Start Them Off Young, and Keep the Momentum Going

Our son Josh's 6th birthday invitation read, "Joshua Golden needs your help! The Dinosaur Recovery Bureau [DRB] is an official agency dedicated to finding and recovering dinosaur bone fossils. Using some highly sensitive computer imaging equipment, their system has discovered what they believe are dinosaur bones near his house. [Name of child], Joshua, and the DRB are counting on you to help safely recover these bones..." You get the picture. We prepared a paleontologist kit for each party guest and they each had their own dig site with a cast of a real dinosaur fossil buried in dirt and encased in baked mud. Each party guest also got to create their own volcano with the lava color of their choice, using baking soda, vinegar, and food coloring. Josh's birthday party had elements of paleontology and chemistry that were very memorable and fun for all. 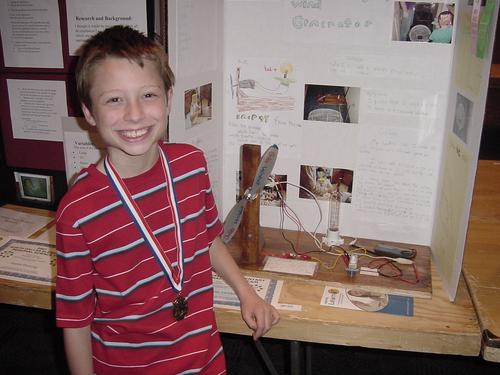 One of the most exciting times of the year for our family was when the handout announcing the science fair was sent home. We would brainstorm ideas with our son and settle on one that captured his imagination while not breaking the bank. One year he did a wind generator and another year he experimented with model rockets to see which design would be most aerodynamic. While we made sure our son did the work, we were right there with him for support and encouragement. We were so proud when our son's wind generator won first place at his elementary school and honorable mention in the regional competition and I am not sure who had the most fun when we were shooting off the rockets to measure their altitude at a nearby soccer field. He didn't win every year, but he had fun every year, resulting in an enduring love for science and exploring new concepts. 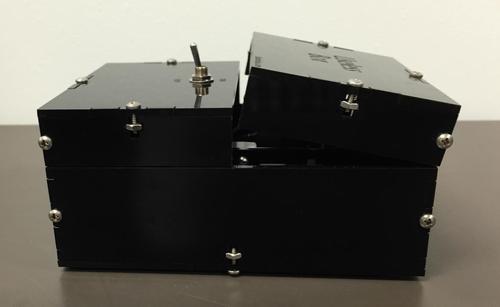 Not long ago, our son came across The Useless Box at ThinkGeek.com. Admittedly one of the silliest electronics projects ever, it is a black box with a switch. When you turn the switch to the on position it opens up and a finger pushes the switch to the off position and quickly closes. Mechanical and soldering skills are part of the build and make a fun project doable in one evening. While it will undoubtedly not win any prizes for research and development it will bring lots of laughs and is a great way to stimulate your kids thinking about the possible applications of simple electronics. 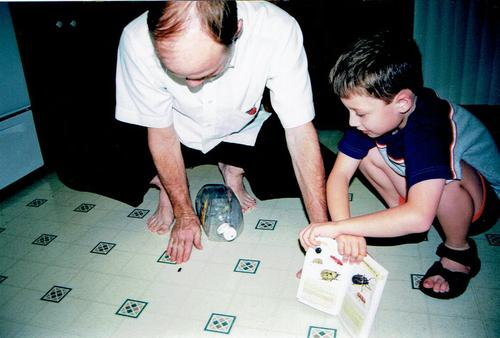 Josh had a huge cardboard box that he turned into a doodlebug town made of grass, dirt, and rocks. And he became quite adept at spotting new additions for his community.

Finding a click beetle in the house was always an occasion for fun. We would place the click beetle in the middle of the kitchen floor on its back and everyone would gather round. When flipped upside down, a click beetle possess an amazing ability to flip itself back up and into the air several inches. Apparently they are capable of doing this without tiring (or at least they can do it until their audience gets tired and sets them back outside). Click beetles are very entertaining and a great teachable moment on the wonders of creation. Finding the small ribbon snake in the kitchen was a chance to have a pet snake for a few days. Josh was 10 at the time and decided to name our visitor Donut. The following weekend we took Donut to the local nature preserve and turned him loose so that he could meet Mrs. Donut and have little Donuts of his own. Our interactions with household creatures as interesting organisms rather than something to smush has given him an everlasting appreciation for nature.

Halloween is always a great opportunity to use one's imagination. It is also an opportunity to teach basic electronics in the creation of a super cool Halloween dragon, like we did a couple of years go. Most of the stuff came from the junk drawer, although the lens for the eyes required a trip to our local bakery in search of cake plates. Josh got to learn about batteries, resistors, and LEDs. He was also in charge of making the dragon roar when an unsuspecting trick or treater approached - via a Jurassic Park dinosaur audio clip from his tablet to a Bluetooth speaker hidden in the trunk.

6.) Make Your Kids Partners, Not Bystanders

I believe the best way we can encourage our kids towards an interest in STEM is to model it with our own enthusiasm as their parents, and be there to cheer them on in their endeavors. Encourage them to come up with ideas during a family project and make sure and utilize some of them. Make your kids partners, not bystanders. Even at 6 years old, Josh was in the garage with his dad helping to make the hammers out of dowels that we put in the paleontologist kits for his birthday party.

Josh is 17 years old now and has since forged his way into his own specific areas of interest. He no longer needs our guidance to get excited about anything STEM related.  It is obvious that he has an abiding love for things STEM, and whatever career path he chooses, he is sure to utilize those problem-solving skills that he gained by his exposure to STEM throughout his childhood.

Nancy Golden started her electronics career at Dallas Semiconductor and moved to Optek Technology where she was a test engineer for several years, eventually moving up to test engineering manager. Nancy became especially experienced in hall effect characterization and test and also gained experience with photologics, LEDs, VCSELs, and fiber optic transmission. She was also the first person to become a Certified TestPoint Application Specialist (CTAS) by Capital Equipment Corporation and has done contract work for Hitachi and Andrews Corporation and control room software for NBC in Testpoint. While employed at Optek Technology she also authored articles for Test and Measurement World on test system development. Nancy owns a small business called Golden Technical Creations, a service oriented company that provides consulting, teaching, PIC programming, course development and web design to its customers. She also has a M.A.R. with a focus on intercultural studies and is an adjunct faculty member at Dallas Christian College.