What Can 3D Printing Offer Surgeons? Biosensors to Improve Safety

Silicone-based 3D-printed devices can be attached to human organs and tissues during procedures to help record and monitor their activity and guide surgeons.

The job of a surgeon is a complicated one, requiring careful steps, precise movements, and the constant monitoring of tissues and organs to ensure a successful outcome.

Now researchers want to make it easier by creating flexible biosensors that can help surgeons record the activity of biological tissue and organs during procedures to keep better track of the critical areas of the body on which they are working.

To facilitate the development of these devices, a research team from Los Alamos National Laboratory and Purdue University have created bioinks for biosensors that are biocompatible and have a working time frame of more than one day. 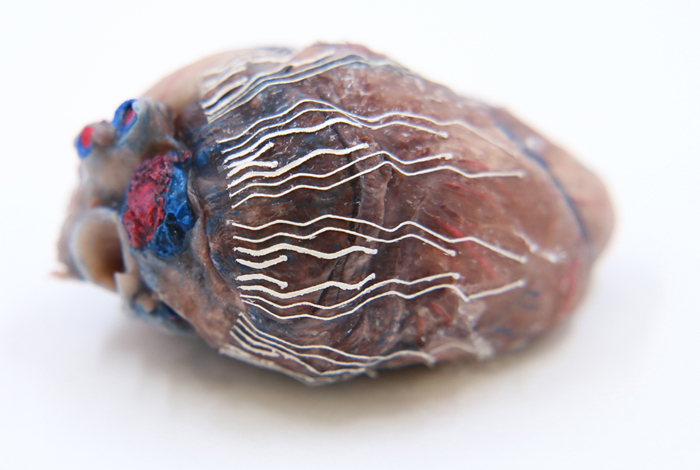 The new biosensors developed by researchers at Los Alamos National Lab and Purdue University allow for simultaneous recording and imaging of tissues and organs during surgical procedures. In this photo, researchers attached the biosensor to the heart of a pig that was obtained commercially.

The new biosensors that can be created from these inks allow for simultaneous recording and imaging of tissues and organs during surgical procedures, researchers said. This can be extremely helpful particularly in cardiac surgeries, said Chi Hwan Lee, an assistant professor of both biomedical engineering and mechanical engineering at Purdue University who worked on the project.

"Simultaneous recording and imaging could be useful during heart surgery in localizing critical regions and guiding surgical interventions such as a procedure for restoring normal heart rhythms," Lee said in a press statement.

The team at Los Alamos was responsible for formulating and synthesizing the bioinks, with the goal of 3D-printing an ultra-soft, thin and stretchable material for biosensors that also can seamlessly interface with the surface of organs.

To create bioinks suitable for this intended purpose, researchers aimed to find a flexible material that could be dispensed through an automated nozzle-injection system but would not deform during the printing process.

While silicone materials are often used for bioprinting because of their biocompatibility, they are liquid and have a flow similar to honey, which makes it difficult for them to be printed without shape deformation in 3D-printing processes, said Kwan-Soo Lee of Los Alamos’ Chemical Diagnostics and Engineering group who also worked on the project.

To solve this problem researchers developed sponge-like poroelastic silicone composites that they adapted “for high-precision direct writing of custom-designed stretchable biosensors, which are soft and insensitive to strains,” they wrote in a paper on their research published in the journal Nature Communications.

The team tested the biosensors by custom-fitting them for operative scenarios using the hearts of both mice and pigs. Results showed that the sensors demonstrated reliable natural adhesion to the wet surface of organs without needing additional adhesives.

Moreover, the biosensors were able to perform successful recording and imaging of the heart during surgery without having a negative effect on cardiac tissue, researchers reported.

“In vivo evaluations of custom-fit biosensors in a murine acute myocardial infarction model demonstrate a potential clinical utility in the simultaneous intraoperative recording and imaging on the epicardium, which may guide definitive surgical treatments,” they wrote in the abstract.