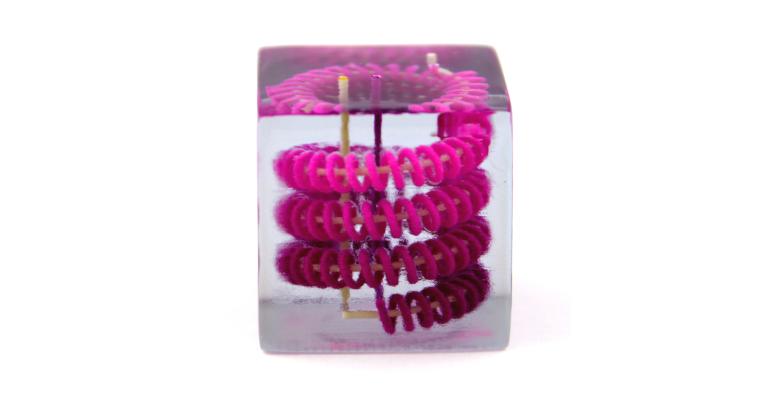 Researchers have found a way to combine materials in different states to fabricate complex robotic and mechanical devices through 3D printing.

So far scientists have managed to 3D-print robots and robotic devices in separate parts. But now a new technique from researchers at Colorado University Boulder paves the way for a complete robot—including medical devices—to be fabricated in this manner.

The method—developed by a team led by Robert MacCurdy, an assistant professor in CU’s Department of Mechanical Engineering—provides a strategy for using currently available technology to create materials that meld solid and liquid components together. This could result one day in the fabrication of a complete robotic device using one printing process, he said.

It also could provide an easier way to provide medical models of real human organs and other tissues to serve the medical field, MacCurdy said. Indeed, “if you have a printer that can use multiple kinds of materials, you can combine them in new ways and create a much broader range of mechanical properties,” he said in a press statement.

These could result in 3D-printed devices that are flexible and dynamic and have a wide range of mechanical properties, including wearable devices or medical robots, he said.

The CU Boulder team created their technique by focusing on how typical printing processes use a printhead to drop tiny beads of fluid—called “voxels,” a combination of “volume” and “pixel”—on top of one another.

In standard printing processes, these droplets are exposed to a bright, ultraviolet light soon after they are deposited. “The curable liquids convert into solids within a second or less,” MacCurdy noted.

However, there potentially are many cases in which these liquids should remain in that state rather than become solid, he said. For instance, some engineers use liquids or waxes to create tiny channels within their solid materials, which they then empty out at a later point to carve out desirable structures similar to how drips of water carve patterns into rocks or even create entire underground caverns, MacCurdy said.

While this type of empty-space creation is possible in 3D-printed parts, it typically is a time- and effort-consuming endeavor to clean them, and they only can be simple structures, he said.

It’s these limitations that MacCurdy and his colleagues aimed to find a way to overcome, therefore achieving a better understanding the conditions that would allow engineers to print solid and liquid materials at the same time and thus create more complex objects, he said.

To set about finding a solution, researchers first designed a series of computer simulations that examined the physics of printing different kinds of materials next to each other.

What researchers discovered through this process is that it’s difficult to keep droplets of solid materials from mixing into liquid materials, even when the solid material is printed directly on top of the liquid. This inspired the team to develop a set of rules that would keep the materials separate, they said.

The team discovered that the surface tension of a liquid can be used to support solid material, especially when the liquid is denser than the solid, researchers noted. This is the same physics that allows oil to float on top of water, noted Brandon Hayes, a doctoral student who worked on the project.

The team then loaded a 3D printer with both a solid and a liquid to experiment with their solution. They used a curable polymer as the solid alongside a cleaning solution as their liquid.

The results of the tests were promising, researchers said. They were able to 3D-print twisting loops of liquid and a complex network of channels similar to the branching pathways found inside a human lung, they said. These structures would not have been possible to fabricate with previous 3D-printing approaches, researchers attested in a paper on their work in the journal Additive Manufacturing.

The work has implications not only for using both solid and liquid materials to print entire robotic devices or other technology in one go but also to 3D-print realistic models of human tissue, researchers said.

To that end, MacCurdy also recently joined a team of researchers from CU Boulder and the CU Anschutz Medical Campus in an endeavor to use the method his team developed to create these models, he said. The idea is that the models can help doctors practice for procedures and diagnose patients.

“We hope our results will make multi-material inkjet 3D printing using liquids and solids more accessible to researchers and enthusiasts around the world,” MacCurdy said.