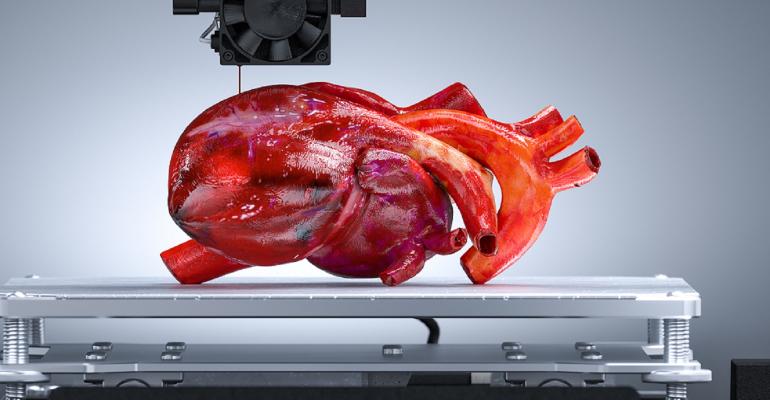 Use of hydrogels in novel stereolithography process eyed for fabricating viable tissues for transplants and other biomedical applications.

The Holy Grail of 3D bioprinting is to one day be able to fabricate full-sized human organs and tissues to replace the real thing in cases of transplant surgeries and other biomedical applications.

Researchers at the University at Buffalo have made a significant step not only to achieve this endeavor but to do it quickly. A team of researchers there has developed 3D-printing technology that has demonstrated rapid printing of life-sized organs and limbs such as a human hand in less than 20 minutes.

The team—co-led by Ruogang Zhao, associate professor of biomedical engineering, and Chi Zhou, associate professor of industrial and systems engineering—created a 3D-printing method based on stereolithography that uses hydrogels to produce organs quickly. Hydrogels are materials comprised mainly of water that are already used to produce contact lenses and diapers as well as in other applications.

“Our method allows for the rapid printing of centimeter-sized hydrogel models” that “signiﬁcantly reduces part deformation and cellular injuries caused by the prolonged exposure to the environmental stresses you commonly see in conventional 3D printing methods,” Zhou said in a press statement.

That method is called fast hydrogel stereolithography printing (FLOAT), which allows for the creation of a centimeter‐sized, multiscale solid hydrogel model within minutes. The idea is that this technology can be used to produce life-like tissue samples and organs as needed, which would provide a solution to the shortage of organs available for those needing transplants, researchers said.

While the printing of “large size cell‐laden hydrogel models hold great promise for tissue repair and organ transplantation, their fabrication using 3D bioprinting is limited by the slow printing speed that can affect the part quality and the biological activity of the encapsulated cells,” researchers wrote in an abstract for a paper on the work published in the journal Advanced Healthcare Materials.

Researchers developed the method by precisely controlling the photopolymerization condition of the process to create a low-suction, force‐driven, high‐velocity flow of a hydrogel prepolymer. “This supports the continuous replenishment of the prepolymer solution below the curing part and the nonstop part growth,” they wrote.

By controlling the printing process in this way, FLOAT can produce parts without the usual stress and deformation that other 3D-printing methods can produce, particularly in rapid-fabrication scenarios, Zhao said.

“The technology we’ve developed is 10-50 times faster than the industry standard, and it works with large sample sizes that have been very difficult to achieve previously,” he said in a press statement.

Moreover, the process can be used to print living cells embedded with vascular or blood-vessel networks, a nascent technology that are expected to be an integral part of the production of 3D-printed human tissue and organs. These networks are a part of the connective infrastructure that provides viability for these fabricated organs to function like the real thing, researchers said.

Researchers have created a rapid 3D-bioprinting method called fast hydrogel stereolithography printing (FLOAT) that has the potential to fabricate organs for human transplant. Pictured is a 3D-printed human liver model that includes a vascular network created by the process.

The team published a video that demonstrates how their FLOAT rapid bioprinting method works. They also have filed a provisional patent of the technology, as well as formed a startup company, Float3D, to commercialize it.