Manipulating Particles With Sound for Next-Gen 3D Printing and Beyond 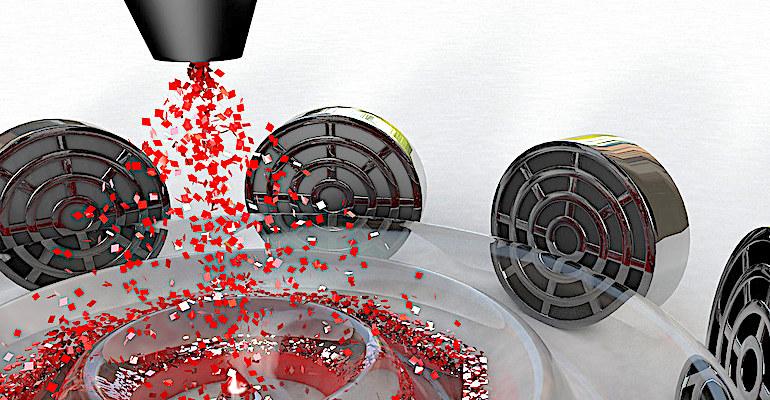 An image shows how ultrasound and computer algorithms control how material settles into shape in a new type of printing called sonolithography invented by researchers at the Universities of Bath and Bristol in the United Kingdom.
Researchers in the U.K. have used ultrasound to print pre-determined patterns on surfaces from aerosol droplets or particles in a new fabrication process called sonolithography.

Researchers have developed a way to use sound to manipulate particles to create a new fabrication process that is faster, more precise, and with potential cost savings than some current methods of print-based manufacturing.

Scientists from the Universities of Bath and Bristol in the United Kingdom are using computer-controlled ultrasound to create precise, pre-determined patterns on surfaces from aerosol droplets or particles in a process called sonolithography.

Inspired by advances in ultrasonic levitation and particle manipulation as well as the “maker” movement in general, researchers said they set out to create “accessible fabrication tools using ultrasonic standing waves,” Jenna Shapiro, a research associate in the School of Cellular and Molecular Medicine at the University of Bristol, told Design News.

“Since my background is in biomaterials and tissue engineering, I was specifically interested in biofabrication—could this be used as a way to manipulate biomolecules, even cells?” she said.

What researchers found is the answer to that question is that it could, paving the way not only for new biomedical applications but also with the potential to manufacture circuits and electronic components using conductive inks. as well as be used in additive manufacturing processes, they said.

Sonolithography works by using arrays of acoustic standing waves in air generated from pairs of ultrasonic speakers, Shapiro told us.

“The interference of the waves generates an acoustic field with defined regions of high and low pressure,” she explained. “Droplets or particles moving through this field migrate to specific regions based upon this pressure distribution and the properties of the materials (e.g. size, density).”

The materials are then deposited onto a substrate in the pattern determined by the acoustic field, Shapiro said. “It’s essentially as if the field is acting as a stencil or a mask, driving the materials into specific areas,” she told Design News.

The team developed a straightforward sonolithography method that can rapidly—that is, in less than 30 seconds--achieve patterned surfaces up to 20 square centimeters, Shapiro explained.

Moreover, researchers created a process that allows for substantial flexibility in both the substrate and deposited materials, including aerosols, proteins, and mammalian cells, she said.

Sonolithography is especially effective when the same pattern needs to be applied to multiple surfaces repeatedly, as the patterning “is highly reproducible,” Shapiro said.

Moreover, the technique is modular--any one of the steps can be swapped out or improved upon, whether that’s the method of droplet or particle generation, the patterning array, or the substrate, she said.

“This means there is still plenty of room for innovation and improvement,” Shapiro told us. “In the fabrication space, we have shown that the material selection can be largely decoupled from the patterning itself, opening this up to a range of potential applications.”

Researchers published a paper on their technique in the journal Advanced Materials Technologies. They also published a video about their research on YouTube.

Beyond its applications in biomedicine, electronics, and additive manufacturing, Shapiro told Design News that she envisions sonolithography being used in industrial processes where control of microscale particles or droplets in an airstream is key, such as in painting or spray coating.

Researchers plan to advance their research next by introducing dynamic control into the process to allow for real-time manipulation of the acoustic field and subsequent patterning, she said.

Shapiro also will explore the potential for biofabrication using the method the team developed, she added.

“I am currently studying how sonolithography can be used to generate unique biomaterial microarchitectures and how these in turn impact cell-material relationships,” Shapiro told Design News. “I want to explore how this technique can be further developed, or used in combination with existing tools, toward creation of mammalian tissues for modeling and regenerative medicine.”